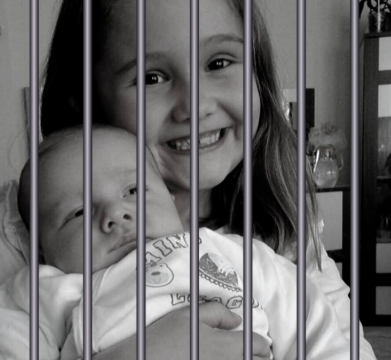 Ugur Akif Hazar (two months old)  and his mother who is a teacher are in jail in Turkey.

Isa Kara, 54-year-old, has worked 34 years as a teacher and director of Ministry of National Education’s Manisa provincial directorate. He was fired from his job with a decree issued by the Turkish government after the alleged coup attempt in July 2016.

Kara was imprisoned in October 2016 on coup charges. Despite his illnesses, he was held in pre-trial detention for 29 days and later transferred to Manisa prison. Kara is partly paralyzed and suffers from serious heart problems. Kara’s doctor had indicated that he needs to stay away from stress due to his heart problem. In an e-mail, it is claimed that two months before he was put in pre-trial detention, he had his first Angiogram. On April 12, 2018, he was transferred by the prison management to İzmir Katip Çelebi University Hospital where he had his second Angiogram. After spending 45 days in the hospital, he was sent back to İzmir Buca F Type Prison.

Kara’s family submitted 15 requests for the release of Isa Kara due to his health condition, however, all of them were rejected. The prison conditions are not satisfactory for the well-being of Kara. The prisons are overcrowded and are not sanitary for such a seriously ill patient. Kara’s doctor has noted numerous times that Isa Kara is not receiving proper treatment under current prison conditions.

There have been many cases of suicide and death in prison, some of which were found to be suspicious, of people who have been affected by the purge of Gülen movement followers. Isa Kara’s family is in the apprehension of severe worries about his health condition as they reminisced about the victims who died for they were not given proper and necessary treatment and were supposed to be given parole due to fatal conditions in jail.

For more detailed information about the prison conditions in Turkey, please take a look at the report prepared by Platform for Peace & Justice titled “A Comprehensive Report on the Prison Conditions in Turkey”.

We urge international bodies and human rights organizations to take all necessary steps to request for pending trial to be taken into consideration due to Isa Kara’s health condition mentioned above.

We urge everyone to take action. Express your views or send attached statement below to following relevant individuals and organizations.

“Paralyzed teacher being held in Manisa prison for 22 months over coup charges”
https://turkeypurge.com/paralyzed-teacher-being-held-in-manisa-prison-for-22-months-over-coup-charges

PICTURES ON THIS SUBJECT:

Your ticket for the: Seriously ill educator still held in Manisa prison for 22 months