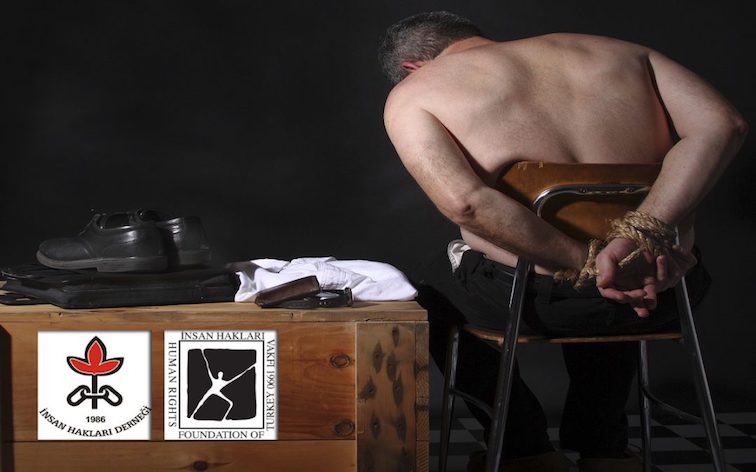 The Human Rights Association (İHD) and the Human Rights Foundation of Turkey (TİHV) on Saturday said 2,278 people were tortured and 11 abducted in Turkey during the first 11 months of 2017, Gazeteduvar reported.

Releasing a human rights report in Turkey under an ongoing state of emergency, the IHD and TİHV noted that human rights violations have reached worrying levels in Turkey. Recalling that the ruling Justice and Development Party (AK Party) government has issued 28 decree-laws since July 20, 2016, and that only five of them were approved on time by Parliament despite the fact that all legislation must be approved in accordance with the Turkish Constitution, the IHD and TİHV underlined that with its state of emergency decrees the government has created guarantees for state officials that they will not be prosecuted for violations committed during the period of emergency rule.

According to the report issued by the two rights organizations, security forces killed 36 people and wounded 12 in extrajudicial killings and by firing arbitrarily into a crowd on the pretext that they did not obey an order to stop, in the first 11 months of 2017.

A total of 695 people including 183 soldiers, 460 militants and 52 civilians were killed and 310 injured during clashes in Turkey.

Twenty-three people including six children were killed and 46 injured in accidents involving armored security vehicles.
A total of 570 people applied to the TİHV as victims of torture; 2,278 faced torture and maltreatment with 423 of such cases took place while in detention.

A Turkish human rights lawyer has reported the torture of his brother under custody of anti-terror police in the southeastern city of Şanlıurfa, Cumhuriyet newspaper reported on Monday.

The Şanlıurfa branch of the Human Rights Association (İHD) is to submit evidence from İlhan Öngör, who is the co-chair of the Adana branch of İHD, to a prosecutor and ask for an investigation into what happened to his brother, Mahmut Öngör, in police custody.

“Physical torture was carried out: electrocution, bastinado, beatings, etc.” he wrote in his submission to the association.

According to a report by online news outlet Ahval, İlhan Anger has stated that “He cannot use his left hand from the wrist down. His nose is covered in wounds and there are scars across different parts of his body. There is extreme bruising above the left part of his groin. The scars resemble those made through electrocution. He struggles to talk and his entire body shakes.

“As the meeting was carried out under police supervision, my brother could not talk freely. When he tried to talk, his teeth rattled and he could not talk due to the pain from his injuries. He has experienced intensive insults and psychological violence.

“My brother was tortured due to using his right to remain silent when he was previously arrested to give a statement at the police station.

“Despite all this, my brother has not been brought to a doctor. His arrest and torture continue.”

Your ticket for the: Turkish Police Torture Brother Of A Human Rights Lawyer In Southeast Anatolia