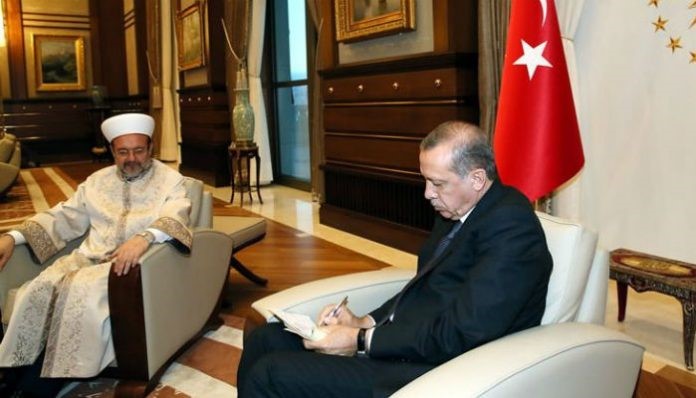 Turkey’s Directorate of Religious Affairs (Diyanet) has gathered intelligence from imams in 38 countries on the activities of suspected followers of the Gülen movement, according to the Hürriyet Daily News.

In a briefing to the parliamentary Coup Commission, the Diyanet said it gathered intelligence and prepared reports on movement sympathizers in Abkhazia, Germany, Albania, Australia, Azerbaijan, Belarus, Belgium, Bosnia and Herzegovina, Bulgaria, Denmark, Estonia, Finland, Georgia, the Netherlands, the United Kingdom, Sweden, Switzerland, Italy, Japan, Montenegro, Kazakhstan, Kenya, Kyrgyzstan, Kosovo, Lithuania, Macedonia, Mongolia, Mauritania, Nigeria, Norway, Poland, Romania, Saudi Arabia, Tajikistan, Tanzania, Turkmenistan and Ukraine.Photos of individuals with alleged links to the movement were included in some of the Diyanet’s reports, the daily said.Officials, religious coordinators and religious services counsellors in Turkish mosques in the aforementioned countries have prepared 50 reports on the activities of movement-linked schools, businesses, foundations, associations and media outlets.Media earlier reported that sympathizers of the Gülen movement were even denied entry to the mosques in Europe.At least 35 incidents this year were reported involving threats against Hizmet members in the German state of North Rhine-Westphalia (NRW) alone, Ralf Jäger, NRW’s interior minister, told Deutsche Welle in September.In the meantime, Dutch police, until early September, investigated 150 complaints lodged by sympathizers of the movement for threats and intimidation they received on social media. Investigations have resulted in a 42-year-old Dutchman of Turkish descent so far.A 28-year-old man of Turkish origin was also handed down a prison sentence of eight months and a fine of 23,000 euros by a French court after he attacked several institutions affiliated with the faith-based Gülen movement in the country, in September.

Your ticket for the: Turkey’s Religious Directorate says profiled expats via mosques in 38 countries