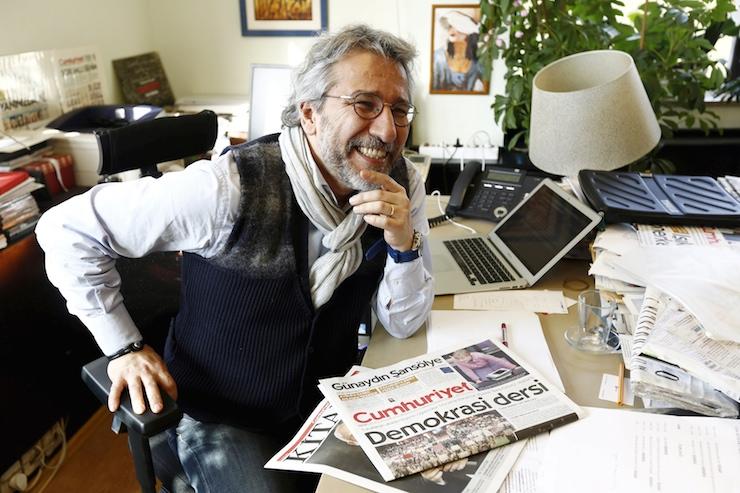 As the whole world still struggles to make sense of the shroud of fog over the mysterious case of a Saudi journalist whose sudden disappearance in Istanbul shuddered the international community, a Turkish journalist living in self-imposed exile in Germany has expressed fears over his own wellbeing and his family’s safety in Turkey.

Can Dundar, former editor-in-chief of the opposition Cumhuriyet daily, revealed his deep-seated anxiety and dread over threats by the government of President Recep Tayyip Erdogan.

Speaking in an interview with Deutsche Welle, Dundar said Erdogan’s opponents are at risk everywhere in the world. His remarks came in the wake of Saudi journalist Jamal Khashoggi’s startling disappearance in Saudi Consulate in Istanbul. The incident is still riddled with mystery and enigma, with little answers available over a set of questions about the fate of the critical journalist.

Dundar has found himself again in the crosshairs of the Turkish president as he accused the journalist at a recent press conference in Berlin of being a foreign spy working for foreign governments. In the eyes of the Turkish government, he has already been painted as an enemy figure after the Cumhuriyet, under his editorial watch, published records of Turkey’s arms shipment to the warring sides in Syria in 2015.

President Erdogan vowed to not let him go without a punishment for leaking “classified state secrets.” After serving a brief time in jail, the journalist was released pending trial. He survived an assassination attempt outside Istanbul Caglayan Courthouse.

It was the last straw that paved the way for his departure from Turkey en route to Germany. But the Turkish authorities seized her wife’s passport and did not allow her to travel with Dundar.

When asked about Erdogan’s treason and spy remarks, Dundar called the Turkish strongman a liar.

“Because there are no journalists in jail on terrorist charges. They are all convicted or accused of leaking state secrets, writing against the government, being critical about the government’s policies, etc.. So they are just journalists, not terrorists,” he told Deutsche Welle. “But calling that kind of thing terrorism is a kind of traditional attitude of this government, unfortunately,” he added.

Dundar whose family is still in Turkey is extremely worried about their wellbeing. He thinks that the Erdogan government keeps her wife as a hostage in Turkey.

When Erdogan was invited to Germany for an official visit, the invitation divided political parties and generated a heated debate over how to handle with an increasingly unruly and authoritarian leader. Many parties in Bundestag expressed their opposition to Erdogan’s visit.

When asked about Germany’s response to Erdogan so far regarding the state of political affairs in Turkey, Dundar appeared satisfied with the messages and calls clearly conveyed by the German side to the Turkish leader during his visit to Berlin in late September.

In the beginning, Dundar thought that the German approach was meek and tepid against Erdogan’s crackdown on media and democracy in Turkey. But later, the Turkish journalist has begun to appreciate Germany’s dire challenge to tread a delicate balancing act between pushing Ankara for democratic reforms and the need to preserve the bilateral relationship as smoothly as possible.

On Thursday, writing for Foreign Policy, Steven Cook shared Dundar’s concerns in the face of threats from authoritarian leaders.

“Ours is an era of international thuggishness combined with a total absence of norms. That makes everyone a target,” he wrote, delving into the riddling case of Saudi journalist and recalling the authoritarian shift in the past decade around the world.

From Egpyt to China, from Turkey to Hungary and Venezuela, dissidents and critical journalists increasingly feel less safe. The unknown fate of Khashoggi remains as a dreadful warning and lesson for others to see. Dundar is one of them. Facing Erdogan’s incessant threats, he is right to be concerned and alarmed.

Your ticket for the: Turkish Journalist in Germany Concerned Over Life Amid Threats From Erdogan