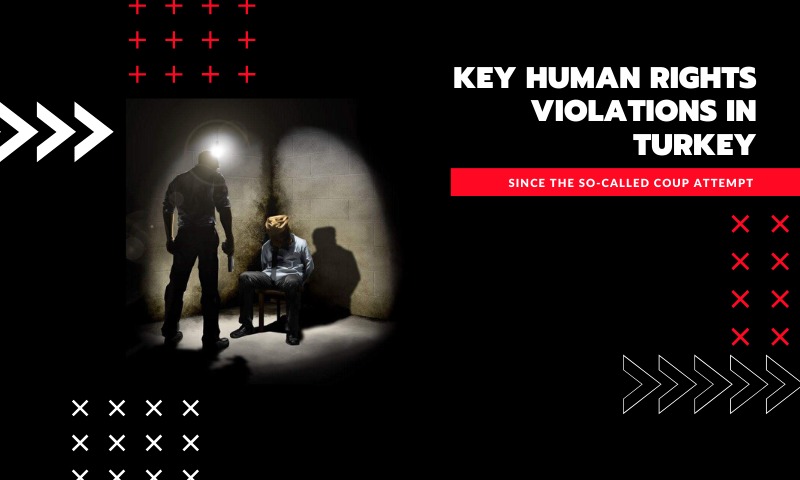 Following the so-called coup attempt on the 15th of July 2016, the Turkish government under the authoritarian leadership of Recep Tayyip Erdogan has taken a wave of oppressive actions against not only the alleged coup plotters but also those that are perceived as critics of the regime. Currently, as part of Turkey’s post-coup crackdown, more than 130,000 people including judges, academics, teachers, journalists, police and military officers, and other public servants have been dismissed from their jobs. In correlation, more than 217,000 have been detained and 160,000 have been arrested. Amnesty International reports that detainees were “being held arbitrarily” with “no evidence establishing reasonable suspicion of criminal behavior” and that “only a tiny minority of them were accused of taking part in the actual events of the attempted coup”.

Amid the massive crackdown of hundreds of thousands of dissidents, human rights organizations and the U.N. Human Rights Council have noted that human rights are violated on a large scale by the Turkish government. Arbitrary killings, suspicious deaths of people in custody, forced disappearances, tortures, ill-treatments, injustice, and threats – mostly against the followers of the Gulen Movement, Kurds, and the Leftists – have been reported widespread during this large-scale witch-hunt.

As people continue to be arrested and many more tortured and abducted, the present brief of Advocates of Silenced Turkey (AST) highlights some of the key human rights concerns that have taken place in Turkey during this on-going period.

More than 130,000 public servants, with their names attached in lists to emergency orders, were dismissed by emergency decrees. These public servants included over 4,463 judges and prosecutors, 6,021 academics, 6,000 health-care professionals, 33,500 teachers, and 44,500 police and military officers. Not only were people dismissed arbitrarily but also banned permanently from working in the public sector – many were even banned to practice their profession.

With approximately 4,463 judges and prosecutors (including two judges from the Turkey’s highest court) dismissed permanently, over one-fifth of Turkey’s judiciary has been removed. Of those dismissed, at least 2,200 were jailed with their assets frozen due to their alleged links to the Gulen movement. Consequently, the climate of fear paralyzed the judges and prosecutors who still have their positions. The fear combined with the heavy government influence in the court system led to the collapse of the judiciary system and the deterioration of human rights in the country. As a result, Turkey ranked 109 out of 126 countries in 2019 on the rule of law index of the World Justice Project.

Lawyers are among the many groups affected by the post-coup crackdown in Turkey. They were unlawfully associated with their clients’ alleged crimes. Human Rights Watch (HRW) reported that many lawyers were targeted with criminal investigations with little or no evidence. According to the Arrested Lawyers Initiative, over 1,500 lawyers were persecuted over the past three years including 14 lawyers who were presidents of provincial bar associations – of those persecuted lawyers, one third remained imprisoned before and during their trials, and 274 were convicted of membership of armed terrorist organizations and sentenced to long prison sentences. Furthermore, approximately 34 bar associations were shut down by presidential decree with alleged affiliations to terrorist organizations.

Following the coup attempt, 3,003 private schools and 15 universities linked to the Gülen movement were closed by a presidential decree. Eventually resulting in the displacement of over 60,000 students across the country. Over 8,500 academics reportedly lost their jobs either due to direct dismissals or university closures since September 2016 – and many of them were imprisoned. Large-scale dismissals of academics and teachers significantly damaged the education sector thus diminished the right to education.

In the aftermath of the failed coup, the government closed down 200 media outlets – including 53 newspapers, 37 radio stations, 34 TV channels, 29 publishing houses, 20 magazines, and six news agencies – with accused links to the Gulen movement, Kurdish opposition, or Leftists groups. Consequently, a total of 2,308 media workers and journalists have lost their jobs. The government canceled hundreds of press accreditations and revoked passports of an unknown number of journalists and their family members to ban them from traveling abroad. In addition, the government imprisoned a record-breaking number of journalists in the wake of the coup attempt – with that, Turkey became the world’s largest prison for journalists. The Platform for Independent Journalism (P24) reported that at least 126 journalists and media workers were in prison in Turkey as of October 2019 – among them, many were put in long solitary confinement.

The absence of freedom of expression is not only a recurring problem for journalists but for citizens as well. In 2018, the Ministry of Interior reported that more than 7,000 individuals were detained for their social media posts after investigating 631,233 digital materials. In relation to the censorships and content restrictions in the country, Wikipedia has been blocked in Turkey since April of 2017. Currently, out of the 180 countries, Turkey ranks 157th on the Press Freedom Index of Reporters Without Borders and is listed among ‘not free’ countries by the Freedom House.

Turkish government has shut down 14 hospitals and 36 medical centers after the coup attempt on the pretext of alleged ties to the Gülen movement. Therefore, an estimated 21,000 health care professionals were laid off – including doctors, academics, nurses, midwives, and other hospital staff. Of those, 5,261 are medical doctors and academics who specialize in the medical sciences. The figures of how many health care professionals have been detained, arrested or currently in prison are estimated in the thousands. Given the longstanding issue of hospital and staff shortages in the country, the dismissals of health care professionals and the closure of hospitals left many patients in despair of medical care.

With the persecution of tens of thousands of critics, the current population in Turkish prisons is 4-5 times higher than the normal capacity – it has increased from 171,267 inmates in 2015 to 260,144 in 2018. Given the capacity of 211,766, inmates are forced to remain in overcrowded cells. In order to free up space for more political prisoners, the government released nearly 34,000 convicts from prisons. The inadequate provision of health care to prisoners also remains a serious problem. Officially reported by the Ministry of Justice Prison and Correctional Facilities, there were 271 doctors serving nearly a quarter-million of the prison population – of whom, only eight were full-time. Insufficient access to freshwater, proper heating, ventilation, and lighting are other concerns for prison conditions. There are 62,669 political prisoners, 4,000 of them being women and 780 of them being children.

Despite the government’s zero-tolerance claim for torture policy, human rights groups have reported widespread and systematic use of torture and ill-treatment in police custody following the coup-attempt – including severe beatings, threats of sexual assault and actual sexual assault, electric shocks, waterboarding, sleep deprivation, stress positions, long solitary confinement, and depriving of food and water. The Office of the United Nations High Commissioner for Human Rights (OHCHR) stated acts of torture and ill-treatment aimed “at extracting confessions or forcing detainees to denounce other Individuals” in its report on Turkey in 2017. The Human Rights Association (HRA) reported that the number of incidents where prisoners were subjected to torture and ill-treatment in detention centers and prisons was 2,178 in 2016, 2,415 in 2017, and 1,505 in 2018. The Stockholm Center for Freedom (SCF) reported a total of 126 suspicious deaths and suicides since the coup attempt – most of those occurred in detention centers and prisons, seemingly a direct result of torture and ill-treatment.

In the aftermath of the coup attempt, forced disappearances made a comeback in Turkey. Opposing politicians and respected human rights groups claimed at least 128 abductions or possible enforced disappearances of individuals. Most of the victims were identified as dismissed public servants with alleged ties to the Gulen movement or critics of the government. Allegedly, victims were abducted outside detention facilities and illegally questioned and tortured by Turkey’s intelligence agency. Moreover, Turkey’s intelligence agency reportedly abducted over more than 100 alleged Gulen affiliates from 18 countries – individuals often deported illegally – against the universal conventions – by cooperative governments without due process.

The prison conditions for women and children are exceedingly alarming. According to the Justice Ministry, as of 2017, nearly 10,000 women and 3,000 children under 18 are in Turkey’s prisons. The inhumane prison conditions also hold weight in women prisons. They face additional issues of the male security staff frequently obstructing their privacy during hospital visits, oftentimes leading to an incomplete examination.  Among the prisoners, there are more than 30 pregnant women or women who just gave birth and 780 children under 6 years old imprisoned along with their mothers – including 149 infants under 1-year-old. Pregnant women are forced to stay with other inmates in overcrowded cells, also denied access to proper prenatal care – posing serious risks to their well-being. Likewise, mothers with children are also forced to share a cell with inmates.

Even when prison authorities are willing to let the child see a doctor, they do not allow mothers to accompany them. Children have to sleep in the same bed with their mothers and are not assigned a cradle or a separate bed.

The state pays $2 a day per prisoner for food. Since children are not technically incarcerated, they are not allotted any daily food rations and share their mother’s meals.

More than %80 of children in jail with their mothers do not receive any education.

Only %18 receive kindergarten or nursery services, but even then, there is a shortage of educational materials.

Another unlawful activity being pursued during this period is revoking the passports of government critics with perceived affiliations to the Gulen movement, Kurdish opposition, Leftists groups and their family members. On this ground, the Turkish government put restrictions on approximately 155,000 passports, reported by the SCF. Since their passports are restricted, many people, with the fear of persecution, use smuggler routes to flee from the country. Unfortunately, many died in the Evros River and the Aegean Sea. Turkey revoking its citizens’ passports also causes travel struggles for those across the world.

The Turkish government abuses laws to seize assets of its critics. As of March 2018, the government had seized the assets of approximately 1,124 businesses and 127 individuals. According to the Savings Deposit Insurance Fund of Turkey, the net worth of the seized assets is an estimated $32.24 billion since the 2016 coup attempt. Moreover, in most cases, the government freezes the assets of those on trial, financially crippling them and their families.

Your ticket for the: KEY HUMAN RIGHTS VIOLATIONS IN TURKEY SINCE THE SO-CALLED COUP ATTEMPT