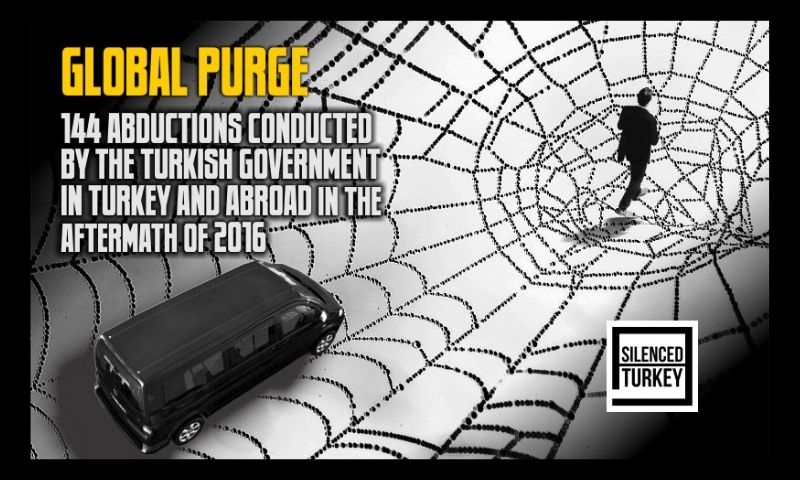 “GLOBAL PURGE” : 144 ABDUCTIONS CONDUCTED BY THE TURKISH GOVERNMENT IN TURKEY AND ABROAD

Since July 2016, the Turkish government went on to imprison hundreds of thousands of homemakers, mothers, children, babies, teachers, NGO workers, academics, judges, prosecutors, journalists and countless other victims. Erdoğan declared a “witch-hunt” against Gülen’s followers, attempting to convince countries through carrot and stick policies or more diplomatic means to join his personal fight and do the same to the Hizmet members within their borders.
Read more

Mustafa Ceyhan Abducted in Front of the Courthouse

Mustafa Ceyhan is a businessman from Turkey who resides in Georgia with his family under UN protection. He visited Azerbaijan from Batumi (Georgia) on 4/20/2017 for a business trip. Once he entered Azerbaijan, he was unjustly arrested on charges of illegally crossing the border to Azerbaijan.

On April 26th, Ceyhan was brought before court in Baku. The trial date was rescheduled to an earlier date, and happened without a notice to his lawyers. His lawyer, Tural Emenov and another lawyer appointed by the United Nation found out about the trial and accompanied him. The judge acquitted him from charges pressed against him.

Ceyhan’s wife, Meryem Ceyhan indicated that as Ceyhan was leaving the court around 12:00 PM, he was abducted in front of the courthouse by a group of eight men in a black Range Rover with black tinted windows. His whereabouts are unknown since then. His family and friends are worried about his condition and fear that he may be illegally sent back to Turkey where he faces risks of torture and ill-treatment.

Ceyhan’s lawyers called the United Nations mission in Baku, Azerbaijan and requested assistance, however, representatives there told them that they could not do anything. They told them to deal with it on their own.

The Turkish government had accused Ceyhan of having ties to the Gulen Movement (also known as Hizmet Movement) and appealed to Azerbaijan to extradite Ceyhan. Alleged supporters of the Movement in Turkey have been dealing with arrest, imprisonment, torture, inhuman and degrading treatment, confiscation and passport seizure. There are many examples of abductions and physical violence incidents in several countries like Sudan, Kazakhstan, Pakistan, Georgia, Myanmar, Malaysia and most recently in Kosovo. President Erdogan has on numerous occasions explicitly praised the abductions and promised more abduction in near future.

We encourage members of the media to contact Mustafa Ceyhan’s Lawyer, Tural Emenov from his phone number, +994554480700.

We urge international bodies and human rights organizations to take all necessary steps to find Mustafa Ceyhan and prevent his extradition to Turkey.

We urge everyone to take action. Express your views or send attached statement below to following relevant individuals and organizations.

“Mustafa Ceyhan, a Turkish citizen of Azerbaijan, was detained in custody – the FETO accusation”
http://ovqat.com/kriminal/19646-turkiynin-azrbaycandan-istdiyi-mustafa-ceyhan-hbsd-saxlanld-feto-ittiham.html

This looks very much like another outrageous kidnapping by the Turkish government. In Azerbaijan. https://t.co/tl07kVlXop

Yet another abduction by #Erdogan regime!
Turkish businessman Mustafa Ceyhan had been in jail for over a year in Baku, Azerbaijan. Today, the court decided his release. Right after the decision, he was abducted by unknown group of men,
Whereabouts is unknown.@RebHarms pic.twitter.com/xAWpkjTjID

Your ticket for the: Mustafa Ceyhan Abducted in Front of the Courthouse

Mustafa Ceyhan Abducted in Front of the Courthouse