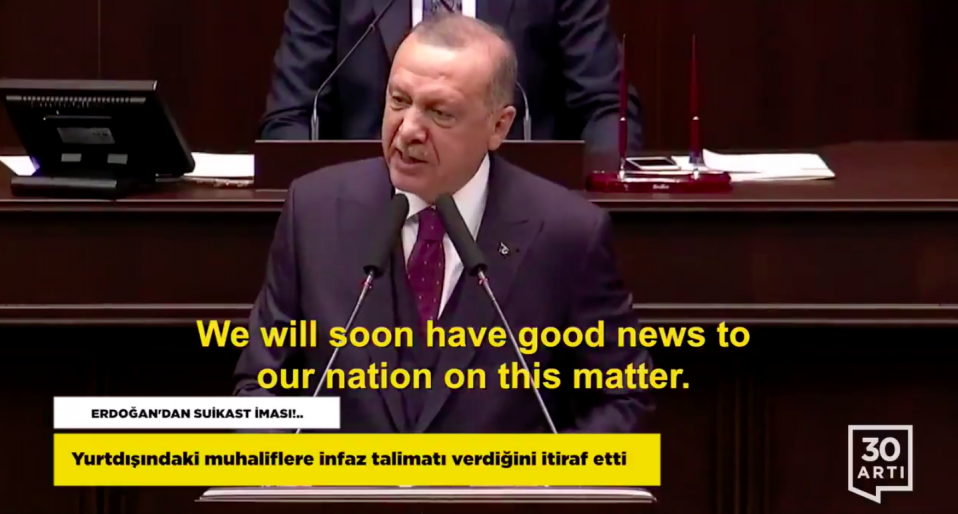 PRESS RELEASE: CALLING EVERY DISSIDENT ABROAD AS TERRORIST, ERDOGAN VOWS TO KILL “TERRORISTS”(!) BY JUSTIFYING THIS ATTEMPT WITH A REFERRAL TO THE OPERATION AGAINST BAGHDADI

CALLING EVERY DISSIDENT ABROAD AS TERRORIST, ERDOGAN VOWS TO KILL “TERRORISTS”(!) BY JUSTIFYING THIS ATTEMPT WITH A REFERRAL TO THE OPERATION AGAINST BAGHDADI

It has now been over three years since the failed coup attempt and the Turkish government has been targeting its dissident citizens abroad since then. Until very lately, the issue was a concern of countries where some kidnappings and abductions took place and where authorities acceded to Ankara’s demands for their extradition.

However, lately, The U.S. administration also came to face the unpleasant reality of such inhumane practices after the unlawful arrests and imprisonments of American citizens in Turkey. Moreover, while opponents of President Recep Tayyip Erdogan have been captured in Moldova, Ukraine, Kosovo, Malaysia, Gabon, and many other countries, last year Erdogan’s spokesperson Ibrahim Kalin hinted that Turkey would conduct such operations on the U.S. soil as well. Following all these intimidations in terms of human rights, this week we faced the most concrete and frightening threat voiced by the Turkish President. While giving a speech on recent happenings in Syria and Baghdadi’s death, Erdogan said Turkey’s actions would be justified in targeting individuals living in foreign countries if these individuals are viewed as terrorists by them and labeled as threats to national security. President Erdogan also added that he hoped he could deliver “good news” on this issue soon.

We emphasize our great concern about such targeting threats and urge the U.S. authorities to seek clarification from the Turkish administration over these threatening remarks. In this respect, a determined stance by the U.S. would play a deterring role for any reckless attempt by the Turkish government against Turkish dissidents living in the U.S.

Your ticket for the: PRESS RELEASE: CALLING EVERY DISSIDENT ABROAD AS TERRORIST, ERDOGAN VOWS TO KILL “TERRORISTS”(!) BY JUSTIFYING THIS ATTEMPT WITH A REFERRAL TO THE OPERATION AGAINST BAGHDADI

PRESS RELEASE: CALLING EVERY DISSIDENT ABROAD AS TERRORIST, ERDOGAN VOWS TO KILL “TERRORISTS”(!) BY JUSTIFYING THIS ATTEMPT WITH A REFERRAL TO THE OPERATION AGAINST BAGHDADI