Video prepared by Reporters without Borders.

These are the messages that Reporters Without Borders (RSF) is sending to the European Court of Human Rights on behalf of Turkey’s arbitrarily imprisoned journalists, by means of a communication campaign launched on social networks today.

For Turkish journalists who have been arbitrarily jailed, the European Court offers the last hope or being released. The proceedings against these journalists violate the European Convention on Human Rights, with which Turkey must comply as a member of the Council of Europe.

In 2017, the European Court agreed to consider the 20 applications it had received from journalists imprisoned in Turkey, and to give priority to these cases. However, the applications are limited to the issue of their provisional detention and will have little effect after the Turkish courts have finished trying them and have passed sentences.

So, this is urgent. The European Court needs to act quickly!

Three well-known journalists, Ahmet Altan, Mehmet Altan and Nazli Ilicak, were already sentenced to life imprisonment on 16 February on a charge of “trying to overthrow constitutional order” for criticizing the government during a TV broadcast on the eve of an abortive coup d’état in July 2016.

This month, the trial of the Cumhuriyet newspaper’s journalists is due to resume and a verdict is expected in the trial of 26 journalists accused of working for media that supported the movement led by Fethullah Gülen, the alleged instigator of the 2016 coup attempt. The two cases are emblematic of the arbitrary justice prevailing in Turkey’s courts.

The net is closing fast on Turkey’s imprisoned journalists, so RSF urges the European Court to act before it is too late, before sentences are passed!

#Turkey: All is not lost for the imprisoned journalists, the European Court of Human Rights (@ECHRPublication) can still change the situation. This is urgent, ECHR, you need to act quickly! #SaveTurkishJournalistshttps://t.co/DDwkdakC0v pic.twitter.com/rFmBM0STG1

Turkey Must Ensure Freedom of Religion under Its Jurisdiction

Especially in the recent years, the Turkish government has been known with its arbitrary interferences with human rights and fundamental freedoms. After the corruption investigations that were launched at the end of 2013, the government started targeting the Hizmet Movement (a.k.a. Gulen Movement) claiming that the group was behind the investigations. The corruption case was about members of the ruling party and their family members including sons of cabinet ministers. Even more, the case was allegedly reaching out to then prime-minister Erdogan and his son. The situation got even worsened after the so-called attempted coup happened in July 15, 2016. Erdogan, now the president, has been accusing the Movement of masterminding the coup attempt, whereas the Movement has been strongly denying their involvement. The state of emergency was declared to weather the storm; however, it was then transformed to a tool to justify the government’s strict measures. Main group attacked has been the Hizmet Movement, nonetheless, many people from other dissident groups have also been suffering from the government’s applications. Excessive number of people belonging to dissident groups have either been arrested, imprisoned, faced torture during imprisonment or dismissed from their jobs. There have also been other examples of human rights violations such as asset seizure, passport cancellations and psychological pressure. Not only real persons but also legal entities founded by dissidents were also targeted and shut down by decree laws adopted without parliamentary and judicial oversight during the state of emergency.

Different religious communities also took their shares from the government’s arbitrary implementations. This paper will talk about the different types of discriminatory practices religious groups have been facing in Turkey recently. It will be evaluated whether freedom of religion and belief is respected at the level required the internationally accepted standards. Therefore, for the purpose of this paper different statements from government officials as well as the government’s actions targeting religious groups will be mentioned below.

Freedom of Religion in Turkey

Turkey has been a secular country since 1928 when the provision indicating the state’s religion as Islam was removed as an amendment to the 1924 Constitution. Since then secularism has been one of the core principles enshrined in the Turkish Constitution. The Constitution of 1982, which is in force now, refers to secularism as well and regulates the freedom of religion and conscience. According to Article 24 (1) & (2) of the 1982 Constitution “Everyone has the freedom of conscience, religious belief and conviction. Acts of worship, religious rites and ceremonies shall be conducted freely, as long as they do not violate the provisions of Article 14.” The Constitution also prohibits any form of discrimination including on the ground of religion.

Freedom of religion is also protected under international human rights law documents binding on Turkey which are the International Covenant on Civil and Political Rights (hereinafter “ICCPR”) and the European Convention on Human Rights (hereinafter “ECHR”). Both ICCPR Article 18 and ECHR Article 9 stipulate freedom of religion and belief as well as include manifestation of his/her religion and belief to the scope. Moreover, the ICCPR specifies Article 18 as non-derogable in Article 4, meaning that even during the state of emergency going on in the country, the government must respect freedom of religion and belief and cannot derogate from its responsibilities. Therefore, Turkey is obligated to ensure that freedom of religion is respected at all levels under its jurisdiction. However, Turkey’s record in terms of religious freedom has not been much praiseworthy. Since its foundation, Turkey has been somehow restricting freedom of religion and belief. Only three groups are recognized officially as minorities which are Greeks, Armenians and Jews. This means all Muslim communities and other non-Muslim groups are not protected specially. This situation itself actually creates inequality between the groups, even though the Constitution promotes for equality.

Anatolia, thus Turkey, has been hosting very different cultures and it is known to be a diverse land for a long time. First and foremost, Alevis are the main group facing discrimination in Turkey. Their places of worships, Cemevis (Cem houses), have been forcefully shut down by the government and are not accepted officially as places of worship. There were even attempts to transform them into mosques. The recognition of minority’s rights and status, such as the right to establish their own institutions, worship places and freely express and practice their faith openly in public, is a problem that has not been addressed since the establishment of the Republic of Turkey. Even though Alevis are the second-largest group of Muslims after Sunni Muslims, they have been having these crucial problems regarding recognition for a long time.

Alevis are also targeted by public officials and society. For instance, Mehmet Gormez, former President of the Directorate of Religious Affairs which is an official state institution, has explicitly said they have had two red lines which are not to classify Alevism as different than regular understanding of Islam and not to accept Cemevis as an alternative worship place to mosques. Alevis have been attacked by the society as well. Short time ago, houses of Alevi citizens in Malatya were marked with crosses in red color by unknown people for intimidation.

Problems of Alevis were also brought before the European Court of Human Rights (hereinafter “ECtHR”) many times. In a recent case, Izzettin Dogan and Others v. Turkey, the Court decided that Turkey has not been protecting the applicant’s right to manifest their religion properly by not providing them religious services in the form of public service, not granting Cemevis the status of “places of worship,” not recruiting their religious leaders as civil servants and lastly by not providing them funding as part of the Directorate of Religious Affairs’s budget. In the light of these, the ECtHR decided on the violation of Article 9 and Article 14.

Since 2013, especially after the coup attempt in July 2016, the Hizmet Movement, a movement that is mainly inspired by a religious cleric Fethullah Gulen, became a target of the Turkish government for religious persecution and marginalization. Ironically, Fethullah Gulen advocates Sunni-Hanafi-Maturidi Islamic tradition, which symbolizes the belief system of the majority in Turkey. In fact, Fethullah Gulen is a retired cleric who worked for the Ministry of Religious Affairs of Turkey for his whole life. However, in the aftermath of the coup attempt, the Turkish government acknowledges no ethical boundaries at all and declares the Hizmet Movement as ‘Firak-i Dalle” (perverted faith) through the propaganda of the Ministry of Religious Affairs. This term has been frequently used against the Movement and has caused social pressure leading to more discrimination in social life. The Ministry of Religious Affairs consistently publishes sermons constituting verbal harassments towards the Movement every Friday to be read in every mosque during Friday prayers which is, according to Islam not to the state law, obligatory for all Muslim men to attend. Therefore, those statements are heard by majority of the public attending Friday prayers. Mehmet Gormez once said following the “Extraordinary Religious Council” that attributes imputed to the Movement and Mr. Gulen cannot be reconciled with Islam. These indeed prove that the Directorate of Religious Affairs, together with the government, targets the Movement specifically because of their relationship with Mr. Gulen. In today’s Turkey, admiring Mr. Gulen, reading his books and listening to his sermons are considered as actions of crime and people who revere him are labeled as terrorists. Therefore, individuals are not free to choose which understanding of Islam or which Islamic scholar to follow.

Together with these, other beliefs such as Atheism, Shia Islam and different branches of Christianity suffer from discrimination on religious grounds and cannot be considered as free in terms of freedom of religion and conscience under human rights law.

Considering all different types of persecutions religious communities have been suffering, one cannot say that Turkey is complying with its responsibilities under the 1982 Constitution, the ICCPR as well as the ECHR. If the country is secular, then it must be equidistant from all types of beliefs. As the Advocates of Silenced Turkey, we would like to remind the Turkish government that it is obligated to ensure freedom of religion under its jurisdiction and also that it must align its domestic law and practices with internationally accepted human rights standards. 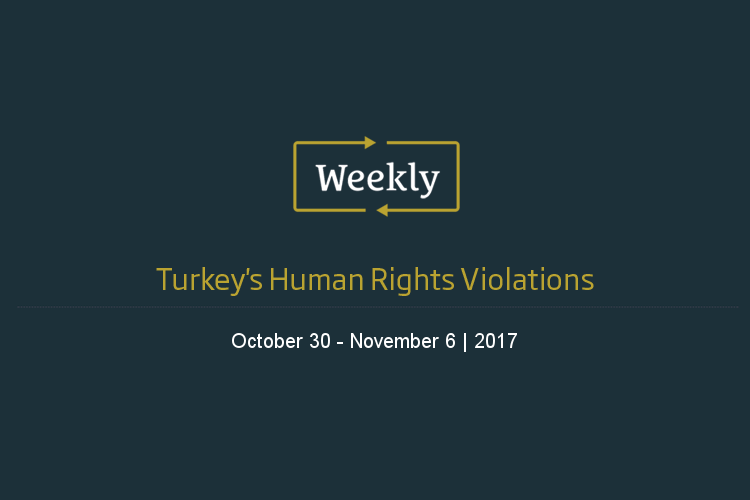 2-“Tearful Balıkesir Mayor Uğur resigns in the face of threats to his family”
https://www.turkishminute.com/2017/10/30/tearful-balikesir-mayor-ugur-resigns-in-the-face-of-threats-to-his-family/

3-“759 detained in operations targeting Gülen movement in past week”
https://turkeypurge.com/759-detained-operations-targeting-gulen-movement-past-week

19-” Turkish Government Imprisons One More Mother With Her Baby Over Links To Gülen Movement”
https://stockholmcf.org/turkish-government-imprisons-one-more-mother-with-her-baby-over-links-to-gulen-movement/

23-” Anonymous witnesses fail to identify suspects they earlier tipped off as Gulenist”
https://turkeypurge.com/anonymous-witnesses-fail-identify-145-suspects-earlier-tipped-off-gulenist

26-” Famous baklava maker says under arrest for 15 months over a book seized at workplace”
https://turkeypurge.com/famous-baklava-maker-says-arrest-15-months-book-seized-workplace

30-“Yet another child put behind bars along with jailed mother”
https://turkeypurge.com/yet-another-child-put-behind-bars-along-jailed-mother