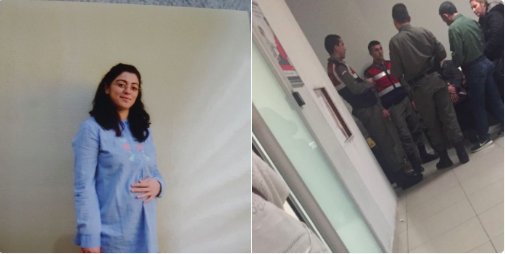 Watch of Shame at Delivery Room Entrance for Ayşe Ateş, A Mother Who Just Gave Birth

Ayşe Ateş, an accountant dismissed from her job due to the statutory decrees in Turkey, gave birth today. Despite the doctor’s advice, the prosecutor denied Ayşe Ateş’s mother to stay with her. Soldiers waited for Ayşe Ateş outside the delivery room entrance. After the delivery, Ayşe Ateş and her one-day-old baby were brought back to the prison. CHP Deputy and human rights activist lawyer Sezgin Tanrıkulu said, “History has not seen such unscrupulousness”.

Fatma Türkmen, who gave birth to a baby in Ankara on Monday, was reportedly detained on Tuesday over alleged links to the Gülen movement.

According to a Twitter account, @Odak2014, police came to the hospital several hours after Türkmen gave birth to her baby, and took her to a police station in Ankara for interrogation. The mother was allegedly refused by police to see her newborn baby. The claim has neither been confirmed nor denied by the Turkish authorities.

This is not the first-time Turkish police detained a woman shortly after giving birth, as part of an ongoing investigation into the alleged followers of the Gülen movement.

In July, Rümeysa Doğan in an Antalya hospital and Ayşe Kaya from Edirne province were detained by police after delivery.

On June 2, Elif Aslaner, a religious education teacher who gave birth to a baby May 31 at a private hospital in Bursa province, was detained due to alleged links to the Gülen movement.

In May, Aysun Aydemir, an English teacher who gave birth to a baby in an elective cesarean procedure, was detained at the hospital and subsequently arrested by a court and put in pretrial detention with a 3-day-old baby in Zonguldak province as part of the witch-hunt targeting the Gülen movement.

In late January, Fadime Günay, who gave birth to a baby, was detained by police at Antalya’s Alanya Başkent Hospital.

In early January, Ş.A., a former private school teacher and mother of a week-old premature infant, was taken into police custody over links to the movement while she was on her way to the hospital to feed the baby.

A day after Ş.A. was taken into police custody, another woman known as Meryem gave birth to twins by C-section at a hospital in Konya and was detained by police despite hospital reports said that she should not travel and was taken to Aksaray from Konya in a police car.

According to recent data released by the Ministry of Justice, 668 children aged between 0 to 6 are being held in prison along with their parents.Turkey’s Justice Ministry announced on July 13 that 50,510 people have been arrested and 169,013 have been the subject of legal proceedings on coup charges since the controversial military coup attempt on July 15, 2016.

Your ticket for the: Another Turkish Woman Detained On Coup Charges One Day After Giving Birth