STATUTORY DECREE NO. 696 AND THE DEMISE OF RULE OF LAW 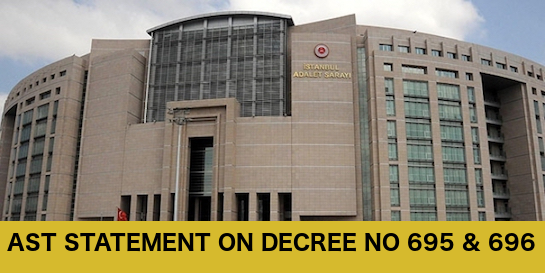 Since the July 15 alleged coup attempt, which President Erdogan defined as a blessing from God, Turkish democracy and justice have continuously deteriorated every day. Within the 24 hours after the alleged coup attempt, the Turkish state that was future-promising and showing signs of being able to compete with countries such as those of the European Union changed drastically. In less than 24 hours after the July 15th, Turkey woke up the widespread chaos; unresolved crimes, kidnappings, coffee shop raids, corruption and many illegal acts that would are accustomed to Third World Countries.

After the July 15th failed-coup attempt, the state has engaged in many illegal activities. The Erdogan regime passed several statutory decrees including the Decree number 675, which is mentioned in detail below, to suppress fear of persecution its supporters possess and encourage them to continue their work. As a matter of fact, the statutory decree mentioned provides impunity to the government officials who have acted in an illegal manner toward masses demonized by the government aided media, in the direction of Erdogan regime’s policies. Nonetheless, it protects them from being prosecuted for any crimes they commit.

Currently, Erdogan regime has issued a statutory decree (KHK) which indicates that all citizens, regardless of whether they are public servant, are entitled to any kind of intervention against those who are demonized and labeled as terrorist by the regime. Accordingly, any person or group considered to be a terrorist in the eyes of the government may be deprived of all rights recognized as universal human rights. Furthermore, anyone who unfairly treats these labeled individuals, without any authorization or court decision, will get impunity from legal or criminal penalties.

Turkey, once shown as a model country for the Middle East, is being rebuilt by the Erdogan regime which is taking conscientious steps to change the state structure and amplify social polarization.

As stated above, on November 8, 2016, the AKP regime issued the 675 numbered Decree Law and tried to cover up crimes committed by civil servants on July 15th. According to this decree: m.37/1:”Within the scope of suppression of the acts of coup d’etat and terrorist acts carried out on 07/15/2016 and their continuing actions, the persons who make decisions or implements measures, and who take part in all kinds of judicial and administrative measures, are immune from legal, administrative, financial and criminal liability within the scope of the decree laws issued during the state of emergency. ”

It is indicated that “Regardless of whether they carry an official position or whether they fulfill an official duty, the first clause shall apply to those who act within the scope of suppression of acts of coup and terrorism carried out on 15 July 2016 and their continuing actions”.

According to the new regulation, regardless of an individual carrying an official position or irrespective of whether or not they have fulfilled an official duty, the persons acting in the context of the suppression of terrorist acts and their continuing actions on July 15th shall have immunity from legal, administrative, financial and penal responsibilities.

The decree law will allow individuals who may not be an official, someone in the law enforcement such as military or police, to take actions and measures without considering their legal, penal, judicial, or administrative consequences. This is a clear violation of the main criteria of fighting crimes, such as being moderate and following principles such as lawfulness. With this arrangement, people have a legal basis to perceive themselves as police officials, which is not possible under a normal legal system. As a result, individuals in the society who feel the government’s support will be able to act with unlimited power.

In a country where it is a crime to even torture a street dog, the legal right to kill any human in any inhumane manner on the basis of unfounded accusations illustrates the extremity of this arbitrary regulation. Accordingly, under the protection of the government, individuals can be a judge, prosecutor and executioner at the same time, and the treat anyone as they wish without the pressure of any time constraints.

Since the arrangement issued inherently protects any kind of actions taken, victims whose rights will be violated will not have any right to file appeals regarding the violations. As a matter of fact, rights have been granted that would not have been granted to anyone or be recognized in any legal system in any country governed by democracy with the noted decree law.

The new arrangement is a declaration of the demise of rule of law, and its replacement with a new state order. In recent times in Turkey, the concepts of acts of terror and terrorism have ceased to be clad in terms of legality. These terms are now merely political in nature. A new concept as ‘unarmed terrorist organization’ has been introduced the courtrooms in Turkey. In the noted decree-law, the concepts related to acts of terror or the term, “continuation of acts of terror”, has not been clarified. This issue is the greatest threat to the hundreds of thousands of people who are subject to or potentially will face unfair trials in the country.

The expression of “suppression of the continuity of the actions” mentioned in the decree-law stipulates that any kind of intervention in the name of suppressing actions regarded as a continuation of actions related to the coup attempt and acts of terror cannot be prosecuted. Furthermore, “the persons who, within the context of the decree laws issued during the state of emergency, makes decisions and acts according to their duties”, whether official or civilian, are given the right to intervene on matters related to individuals whom they label as a terrorist or affiliated with terrorist attacks.

According to this, when someone who has been purged with decree-laws gets in touch with someone else in a similar situation for any reason, they are accepted to potentially have a connection to the July 15th coup attempt.

In this case, since there is no authority to object to the uncountable unlawfulness that may arise, individuals that resorts to inhumane or illegal actions may continue their lives from where they have left it without facing any kind of legal action. Thus, if someone confiscates another’s car, the car owner will not be able to ask “Why did you take it?” Because the regulation in question blocks all kinds of legal initiatives.

Likewise, terrorist organizations close to the current government, mafia-like communities, and paramilitary organizations will get immunity from prosecution and will not be held responsible for their actions. These are privileges that even the state do not possess.

In this context, it is clearly seen that the AKP government seeks to establish a Turkish version of the Iranian Islamic Revolutionary Guard Corps. Notions related to Democracy and human rights can be read in Turkey, yet these concepts will no longer be beyond imagination.

Likewise, any person or group who is a terrorist in the eyes of the government can become a victim of any person who sees themselves as a supporter of the Erdogan regime.

To conclude, this arrangement has made lawlessness lawful and severely harms the independence of the Turkish judiciary. With this arrangement, everyone who receives government support becomes a judge, a prosecutor and everyone also become a legal victim.

Download the statement as pdf: Statutory Decree No. 696 and The Demise of Rule of Law

Immunity to civilians thwarting coup stirs debate in Turkey
“A new state of emergency decree released on Dec. 24 providing immunity to civilians who fought against last year’s coup attempt and terrorist acts that followed it has triggered a fresh debate in Turkey. Metin Feylzioğlu, the head of the Bar Associations in Turkey, said such a law granting immunity to civilians who confronted the July 15 coup attempt and terrorist acts that followed it would result in “people shooting each other in the head on the streets.” “I was terrified when I inspected the decree law no. 696. I was very sad,” Feyzioğlu said.”
http://www.hurriyetdailynews.com/immunity-to-civilians-thwarting-coup-stirs-debate-in-turkey-124701

Erdogan decree stirs fears of legalized extrajudicial violence in Turkey
““They’ve paved the way for anyone who claims to be fighting against terrorism to slaughter everybody else,” Ozgur Ozel, a CHP parliament whip, said in televised remarks in the western province of Manisa. “They will unleash vigilantes on us in a future democratic rally and will face no charges.””
https://www.thestar.com/news/world/2017/12/25/erdogan-decree-stirs-fears-of-legalized-extrajudicial-violence-in-turkey.html

Images of the articles in Turkish:

Your ticket for the: STATUTORY DECREE NO. 696 AND THE DEMISE OF RULE OF LAW

STATUTORY DECREE NO. 696 AND THE DEMISE OF RULE OF LAW