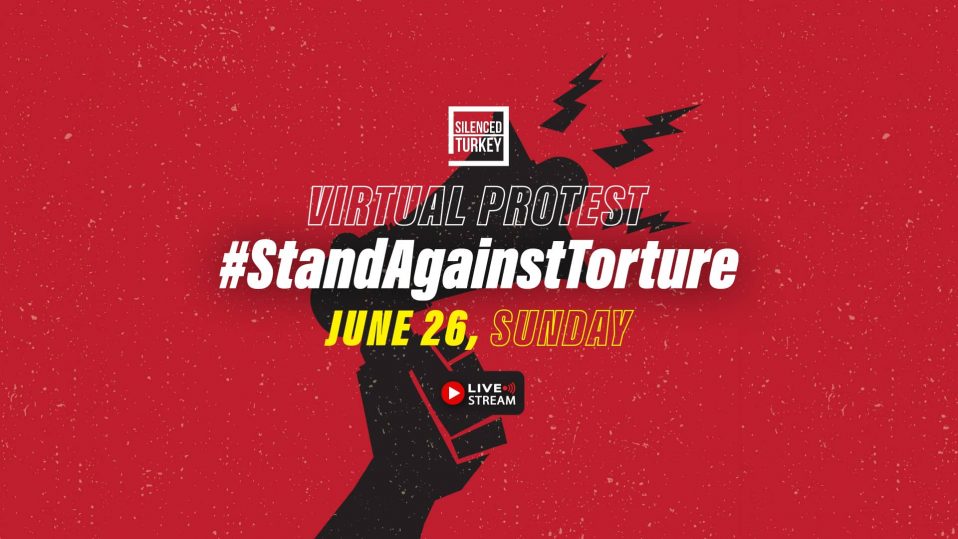 We cordially invite you to the virtual protest on the occasion of International Day in Support of Victims of Torture on June 26, 2022. Along with reflections from law professionals and human rights experts, true stories of survivors of torture will be shared in this virtual protest which will be live-streamed on YouTube.

According to the United Nations Convention Against Torture, the term ‘torture’ is a verb which “means any act by which severe pain or suffering, whether physical or mental, is intentionally inflicted on a person for such purposes as obtaining from him or a third person information or a confession, punishing him for an act he or a third person has committed or is suspected of having committed, or intimidating or coercing him or a third person, or for any reason based on discrimination of any kind, when such pain or suffering is inflicted by or at the instigation of or with the consent or acquiescence of a public official or other person acting in an official capacity. It does not include pain or suffering arising only from, inherent in or incidental to lawful sanctions.”

Government employees who have been involved in the use of torture have been protected by government institutions and officials in Turkey for years and rewarded with impunity. Even when a lawsuit is filed against them, it is ensured that these employees continue their duties and even receive promotions as they are prevented from being sentenced and imprisoned. Especially after the coup attempt on July 15, 2016, the crime of torture has increased significantly, become systematic again in Turkey, and affected a greater number of victims. Despite this increase in torture which was also reflected in the reports of human rights organizations in Turkey, torturers continue to be rewarded with impunity.

We, as Advocates of Silenced Turkey, stand for the rights of the people who are victims of torture in Turkey. We demand proper implementation of laws which recognize and protect the right to life and human dignity. In this regard, we, as AST(Advocates of Silenced Turkey), will hold a virtual protest on June 26th, 2 PM EST, to speak out against the torture. Our plan is to include diverse voices from all around the world extending their concerns/calls and to reach out to thousands of people with this virtual protest live on YouTube. Along with millions of others united in spirit on International Day in Support of Victims of Torture, we echo UN Secretary-General António Guterres in his remarks on torture:
“Torturers must never be allowed to get away with their crimes, and systems that enable torture should be dismantled or transformed.”

In this regard, we would like to invite you to share your remarks on this important cause through a video message. For the video messages, please find the required technical details below.

We would be honored if you could join us to mark this important day by supporting survivors of torture and taking action.

P.S: Video messages are required to be max. 2 minute-long. If you plan to use a cell phone please do not forget to hold the device horizontal. You may only call to “end torture and bring the perpetrators into justice” or share “further remarks” on the issue. Please contact the main coordinator at directorhg@silencedturkey.org for further details. 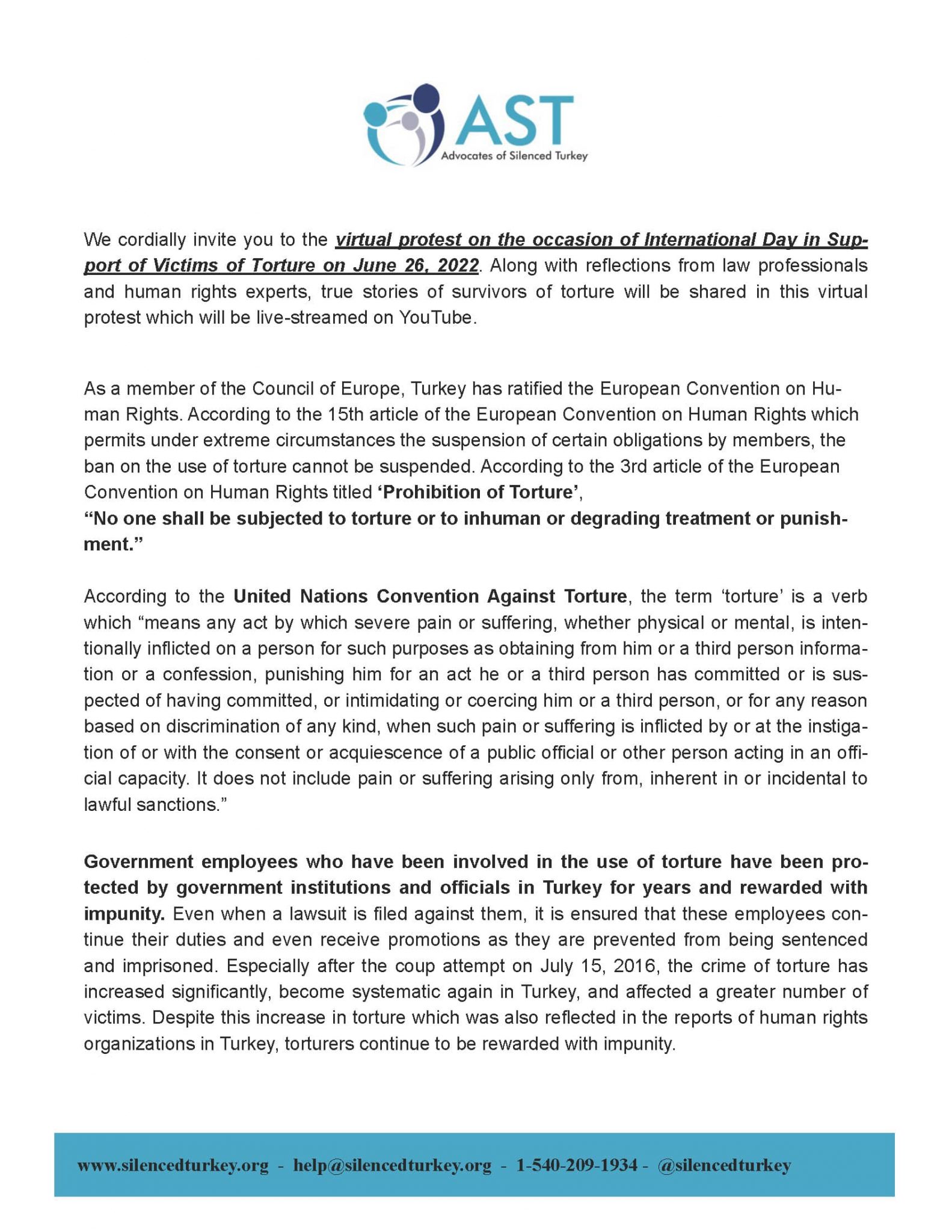 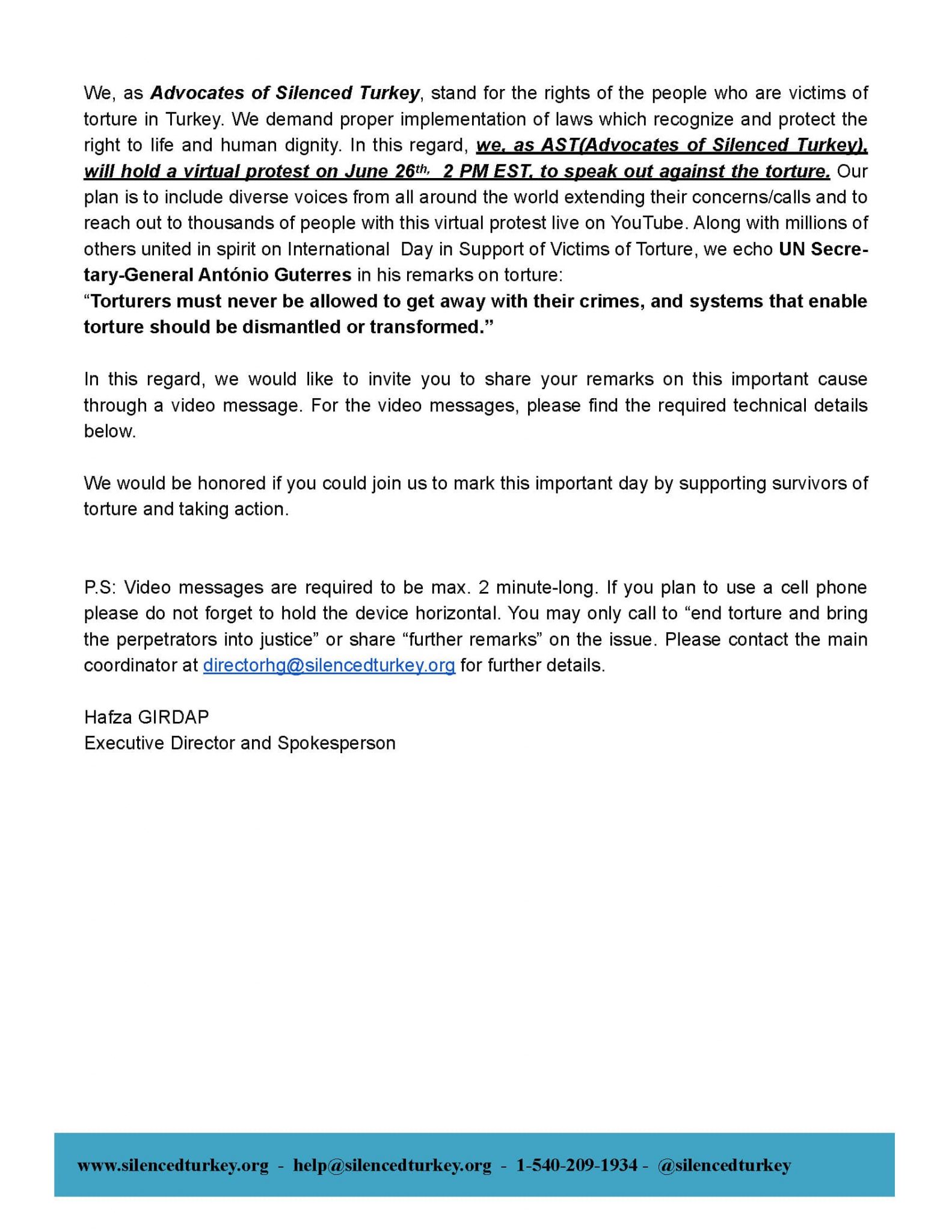 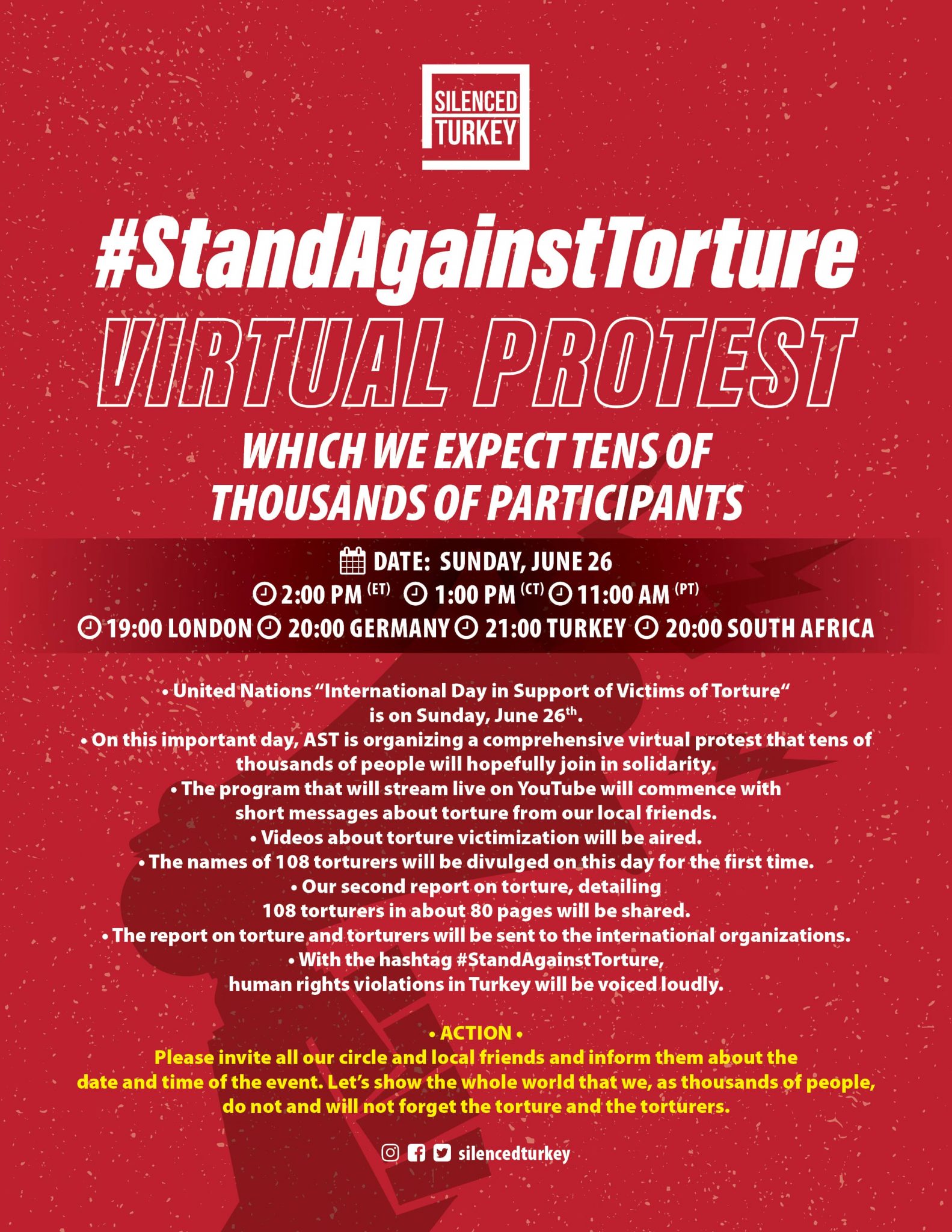 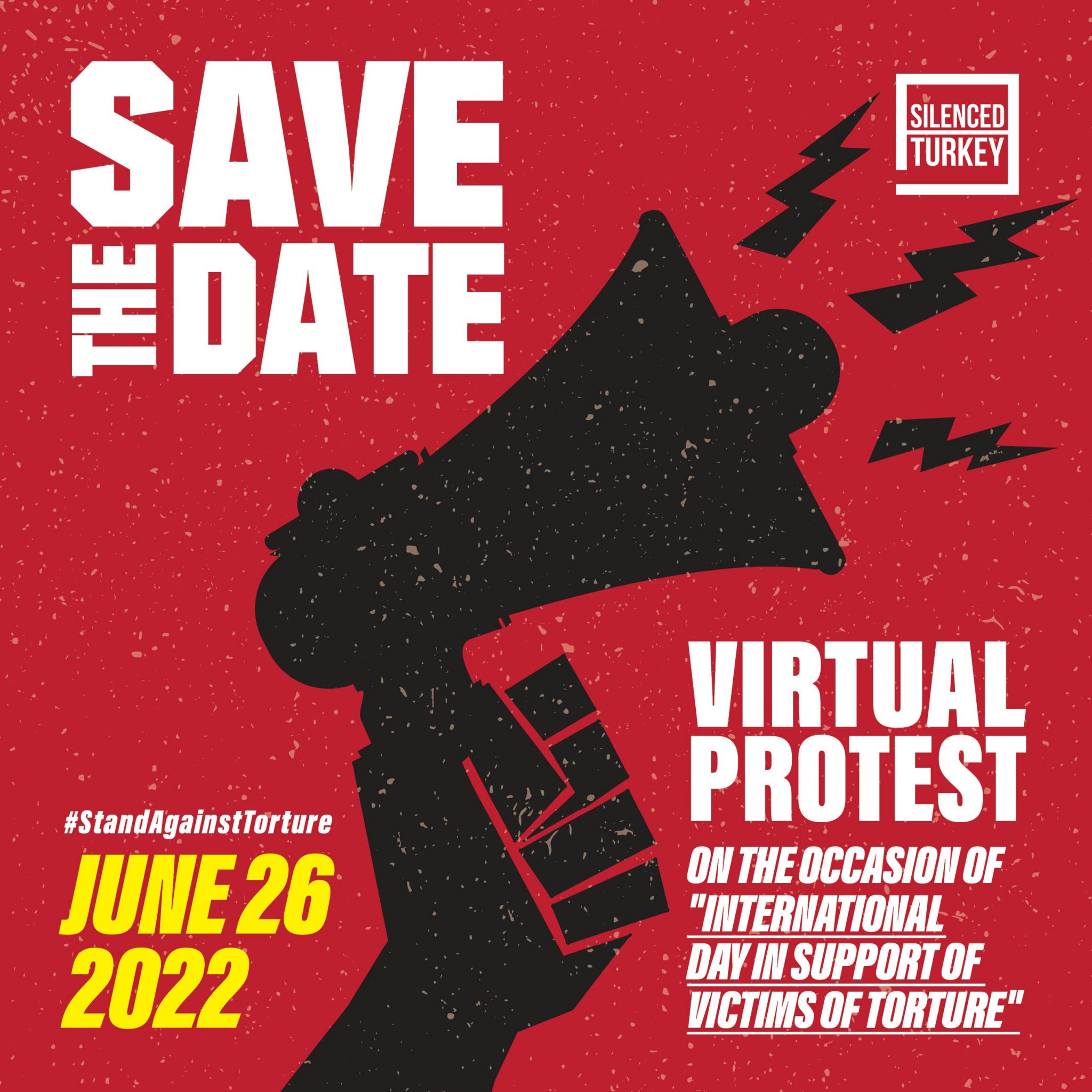 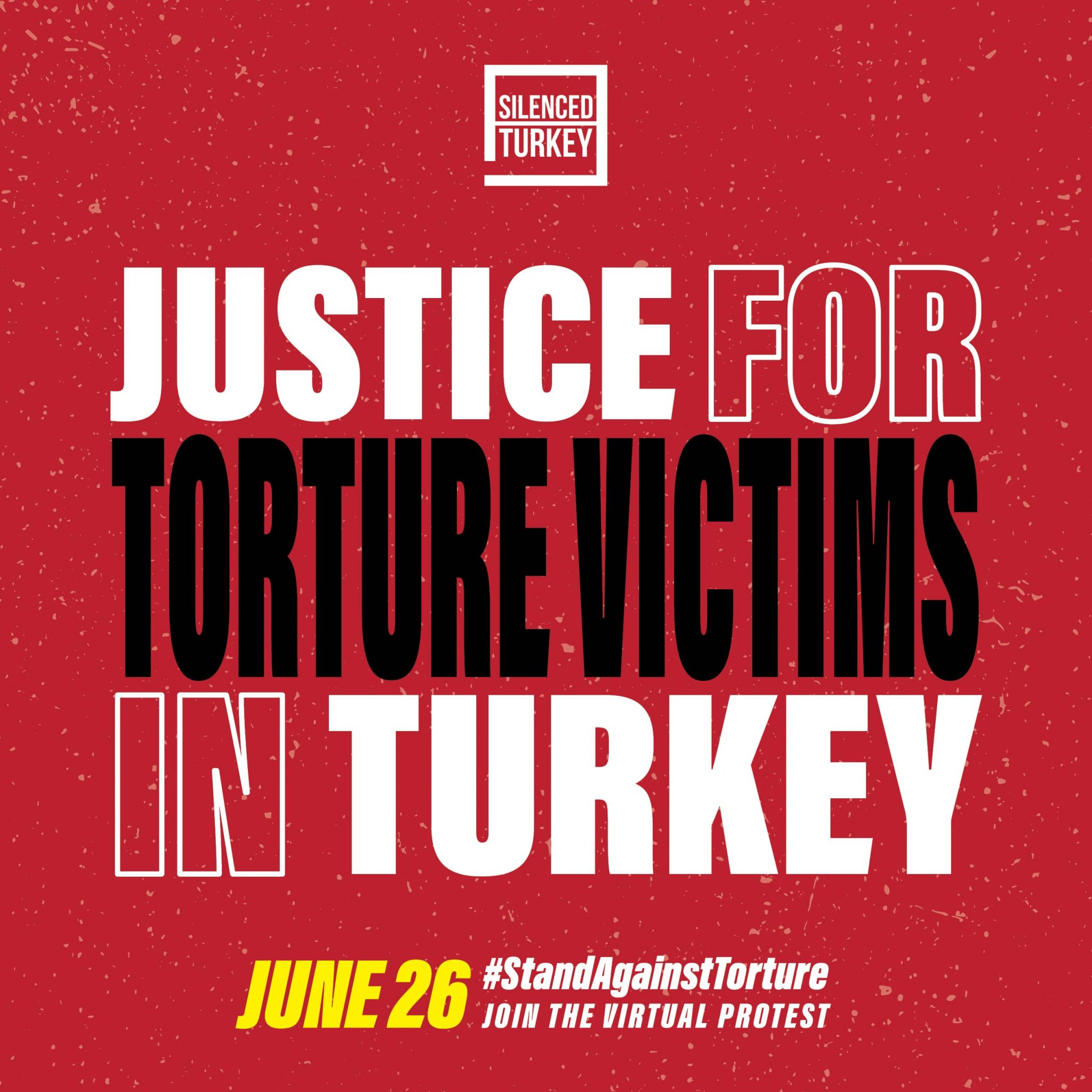 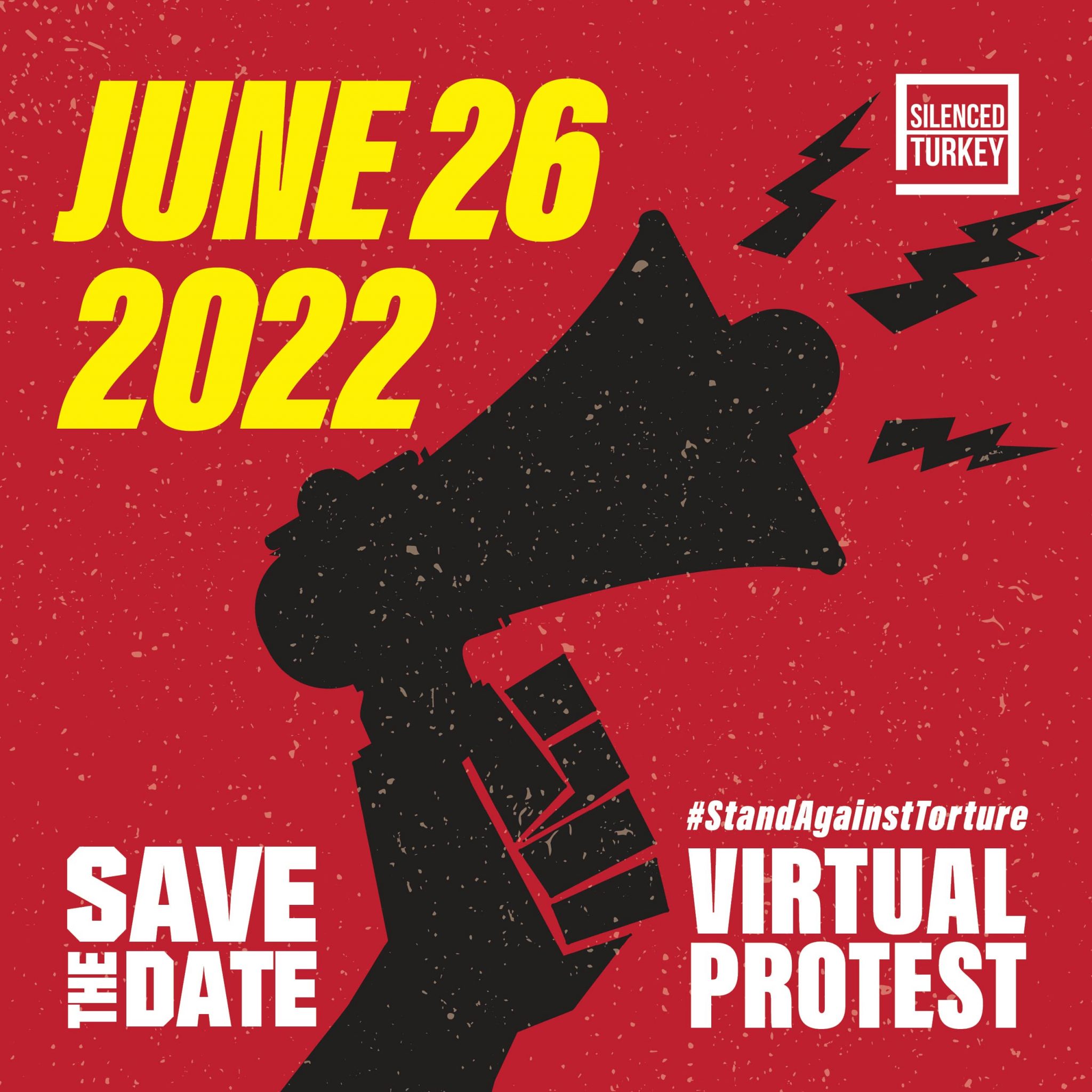 Your ticket for the: Stand Against Torture Virtual Protest – 26 June 2022