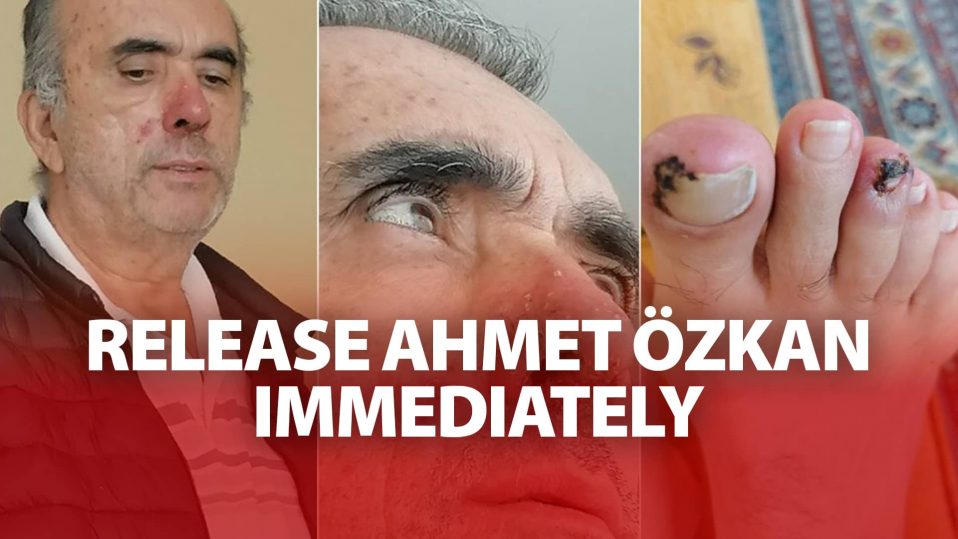 RE: AST URGES TURKISH AUTHORITIES TO RELEASE AHMET ÖZKAN and ALL THE ELDERLY and SEVERELY SICK INMATES IN TURKEY’S PRISONS.

Ahmet Zeki Özkan, a 65-year-old stage 4 cancer patient, has been arbitrarily imprisoned despite the medical reports stressing the severity of his condition.

Ahmet Zeki Özkan was sentenced to 6 years and 3 months in prison for his alleged ties with the Gülen Movement and taken to Antalya L-Type Prison, after the Supreme Court upheld the verdict. Özkan had to stay in the quarantine cell for a week and because there was no bed he had to lie down on the floor. He caught the flu there.

Antalya Forensic Medicine Institute’s report found that Özkan cannot stay in prison due to his severe illnesses yet İstanbul Forensic Medicine Institute issued a report that Özkan could stay “in a prison with a doctor and an infirmary.” Taking İstanbul Forensic Medicine’s report into consideration, the Antalya Chief Public Prosecutor’s Office rejected Ahmet Zeki Özkan’s request to postpone the execution on 14 December 2021. Apart from cancer, Özkan also has diseases such as heart, high blood pressure, prostate and hearing difficulties.

According to the data of the General Directorate of Prisons and Detention Houses, the number of detainees and convicts held in Turkey’s prisons as of January 31, 2022 reached the highest level in its history with 303,389. Beyond all these difficulties, sick and old prisoners live under much harder conditions in the grip of their medical troubles and old age. Although there is no clear information on how many seriously ill people are in prisons in Turkey, the Human Rights Association (İHD) found in a recent study that there were 1,605 sick prisoners, 604 of whom were seriously ill. As AST, we have always been drawing attention to this sensitive and urgent issue in the international human rights arena through different means including the recent report titled “Sick and Elderly Political Prisoners in Erdoğan’s Turkey.”

We, once again, call on the individuals and organizations in Turkey and the international community, who are concerned about grave human rights violations, to take immediate action and adopt a stand against these blatant violations of rights. Özkan’s arrest, which is the last of the painful news coming every day, reveals the urgent need to make effective improvements in this regard.

In consideration with Article 3 of the Criminal Procedure Law No. 6411 and Article 16 of the Law No. 5275 on the Execution of Penalties and Security Measures, AST urges Turkish authorities to release Ahmet Özkan and all the elderly and severely sick inmates in Turkey’s prisons. The law states: “The execution of the sentence of a prisoner who cannot maintain his life alone under the conditions of a penitentiary institution due to a serious illness or disability and is not considered to pose a serious and concrete danger in terms of public safety may be postponed until he recovers according to the procedure specified in the third paragraph.”

Your ticket for the: RELEASE AHMET ÖZKAN IMMEDIATELY