Reactions pour in against gov’t-orchestrated takeover of Zaman daily 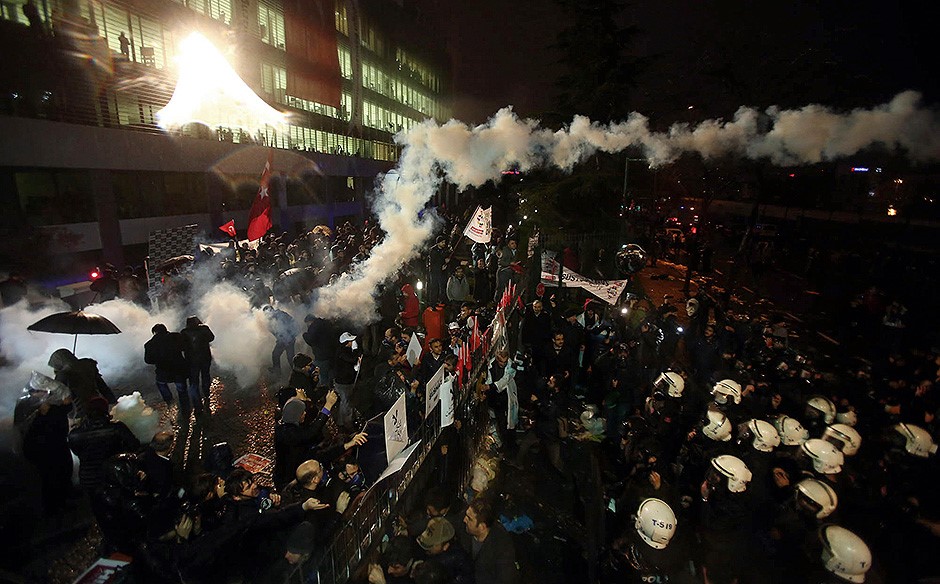 Reactions have mounted in Turkey against a government-orchestrated move to seize the nation’s best-selling newspaper Zaman and its affiliate publications including Today’s Zaman as part of a crackdown on critical and independent media.Republican People’s Party (CHP) deputy Murat Emir spoke on Friday morning when the takeover of Zaman was still a rumor circulating on social media. Emir said that he saw the move as the Justice and Development Party (AK Party) trying to silence free and independent media.Expressing that the media in Turkey faces new attacks every day, Emir said that the majority of these assaults were being done under the guise of the law. “We [CHP] condemn all attempts to subdue the free media. We are against all attacks [against the media] and believe these attacks must come to an end.”

Speaking to Zaman daily on Friday morning, Nationalist Movement Party (MHP) deputy Ümit Özdağ, who recently resigned from his position as deputy chairman of the MHP said he cannot believe the government is going to take over the Zaman daily and its subsidiaries.

CHP deputy Akif Ekici said of the takeover that he believes the current government in Turkey has the potential to take over newspapers, appoint trustees to media organizations, and file people into jails. “I don’t know where this oppression will end though,” he said.

Several staunchly pro-government journalists have claimed that two critical journalists who were recently released from prison will be re-arrested and that the government will silence a major critical media outlet, while a Twitter whistleblower claimed that trustees had already been appointed to take over the media group.

Dündar and Gül were arrested on Nov. 26, 2015 on charges of membership in a terrorist organization, espionage and revealing confidential documents. The charges stem from a terrorism investigation launched after Cumhuriyet published photos in May 2015 of weapons it said were being transferred to Syria in trucks operated by the National Intelligence Organization (MİT).

Star Daily columnist Cem Küçük, who is known for his open threats against media moguls and journalists critical of the government, also voiced similar claims on Tuesday, arguing that “Dündar will face new and more solid indictments.”

Cumhuriyet’s Dündar and Gül were freed after a Constitutional Court ruling on Feb. 25, which said their imprisonment amounted to a violation of their rights.

Küçük also said, “according to information he obtained,” Feza Media Group, which also includes Today’s Zaman, will be seized by the government. He argued that trustees will be appointed to the group soon.

Also on Thursday, Twitter whistleblower Fuat Avni claimed that President Recep Tayyip Erdoğan, who “has no tolerance for any media group that would criticize his plans for a presidential switch,” ordered the seizure of Zaman daily, the main newspaper under the Feza Media Group.”

“He told off those who told him that there is no legal infrastructure to seize Zaman,” Avni claimed.

“He is taking the revenge for the Constitutional Court’s decision favoring the release of Can Dündar and Erdem Gül. The order [to seize Zaman] has been sent to [his] men at the judiciary,” he further claimed.

“They arranged Prosecutor Fuzuli Aydoğdu and the 6th Penal Court of Peace. They made the court to appoint trustees to the Zaman daily,” Avni wrote on Twitter. Avni also argued that any resistance to the seizure of Zaman Media Group will be brutally supressed by the police.

President Erdoğan openly said on Sunday he does not obey or respect the decision by the Constitutional Court that declared that the imprisonment of the journalists amounted to a violation of their rights.“The Constitutional Court may have reached such a verdict. I will remain silent. I am not in a position to accept it,” Erdoğan told reporters before departing for a visit to some West African countries. “I do not obey it nor do I respect it.”Dündar and Gül were arrested on charges of espionage and aiding a terrorist organization in November after the publication of video footage purporting to show Turkey’s National Intelligence Organization (MİT) helping to send weapons to Syria when they were intercepted in 2014 by gendarmerie forces. The arrest drew international condemnation and revived concern about media freedom in Turkey.

Erdoğan, who had described the interception of the MİT trucks as an act of espionage aimed at undermining Turkey internationally, vowed that Dündar and the newspaper would pay a “heavy price” for reporting on the incident. “I will not let him go [unpunished],” he said back in November.

Commenting on claims on more pressure on the critical media, Zaman daily Editor-in-Chief Abdülhamit Bilici said it does not befit a country ruled by democracy and the law to discuss such attempts in 2016. “Such demands and illegal attempts [to silence critical media] are not allowed in countries where democracy and the laws are functioning. We regret to see such comments and claims,” he added.Bilici further said on Twitter that he hopes these claims are not true. “If these disgusting claims are true, I am calling on all democrats to stand by press freedom,” he said.

This is the second time the Zaman daily has become the target of government-orchestrated raids, as on Dec. 14 along police raided the İstanbul headquarters of the daily detaining total of 31 suspects, including Zaman’s former Editor-in-Chief Ekrem Dumanlı as part of a crackdown on dissenting media by the AK Party.

Your ticket for the: Reactions pour in against gov’t-orchestrated takeover of Zaman daily

Reactions pour in against gov’t-orchestrated takeover of Zaman daily