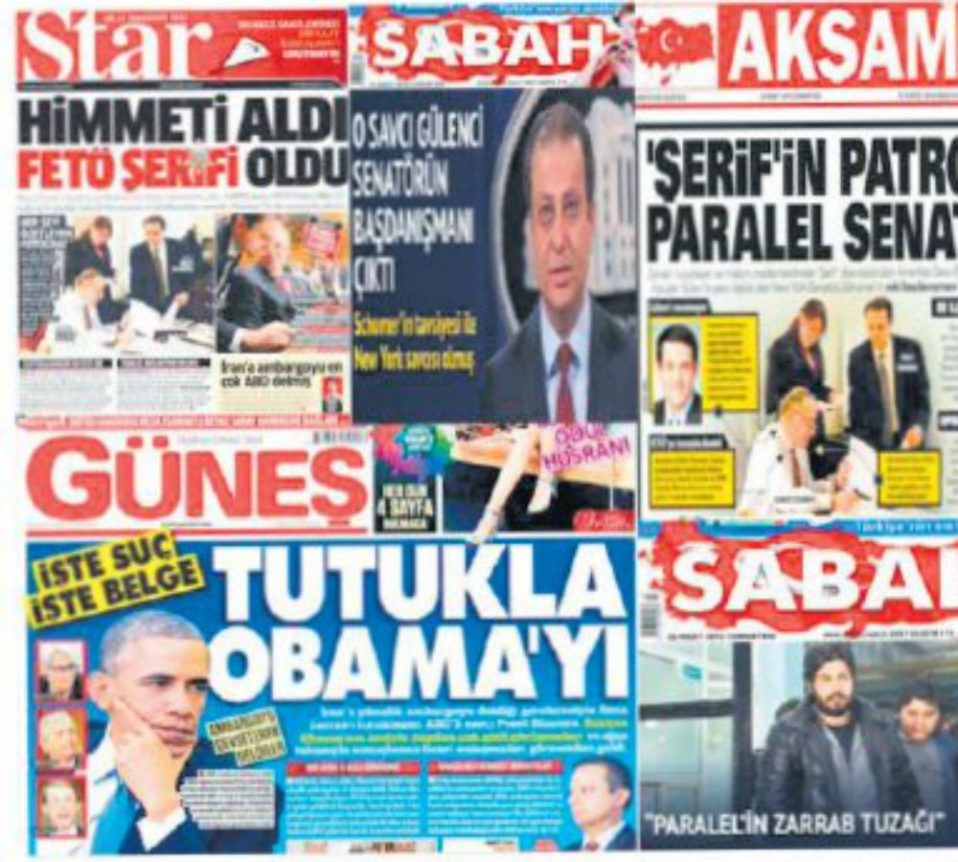 Several pro-government newspapers have ran stories in which they accused the US attorney for the Southern District of New York Preet Bharara as being part of a “parallel structure,” a derogatory term used for the faith-based Gülen movement, after the prosecutor came to public attention last week for bringing charges against a controversial Turkish-Iranian businessman, Reza Zarrab.

On Saturday, Sabah, Star, Akşam and Güneş newspapers, who are known to be the mouthpieces of the ruling Justice and Development Party (AK Party) had all photos of Bharara and US senator Chuck Schumer in their front pages. The dailies cited Bharara’s past with the office of Schumer, whom they introduced as also being a part of the “parallel structure,” as a crime.

Bharara served as the chief counsel to Schumer for a while.

The parallel structure or parallel state is a term invented to refer to the Gülen movement by then Prime Minister and current President Recep Tayyip Erdoğan following the becoming public of a corruption investigation in late 2013 in which Erdoğan’s inner circle was implicated. Businessman Zarrab who was arrested in US last week was the prime suspect in the corruption investigation.

Erdoğan labeled the corruption charges as a coup attempt to overthrow his government and accused the Gülen movement, inspired by Turkish-Islamic scholar Fethullah Gülen, of having masterminded the probe, a claim strongly denied by the movement.

Since then, an all-out war has been launched against the individuals and organizations that are thought to be linked to the movement with many businesses being taken over by the government and individuals being sent to jail.

Zarrab’s arrest came at a time when Turks almost lost hope of justice being served in 2013’s corruption probe because the charges against the suspected were immediately dropped with the appointment of new prosecutors to the investigation. In addition, the police officers and some prosecutors and judges who took part in the probe were sent to jail over coup charges.

The indictment prepared by US prosecutors including Bharara accuses Zarrab of money laundering, bank fraud and conspiring for years “to violate and evade United States sanctions against Iran and Iranian entities.”

Similar charges were brought against the businessman in Turkey in 2013 in addition to bribing government ministers but Zarrab did not stand any trial.

Immediately after Bharara came to public prominence in Turkey last week, the website of the Sabah daily ran a story in which it featured a doctored photo of the prosecutor receiving an award from Kimse Yok Mu charity organization, which is tied to the Gülen movement.

After the original photo came to the surface, Sabah was forced to delete its story, without an apology.

In Turkey, it has become very common to label government critics or opponents as being part of the “parallel structure” in an apparent move to discredit them.

Your ticket for the: Pro-gov’t media accuses prosecutor Bharara of being part of “parallel structure”