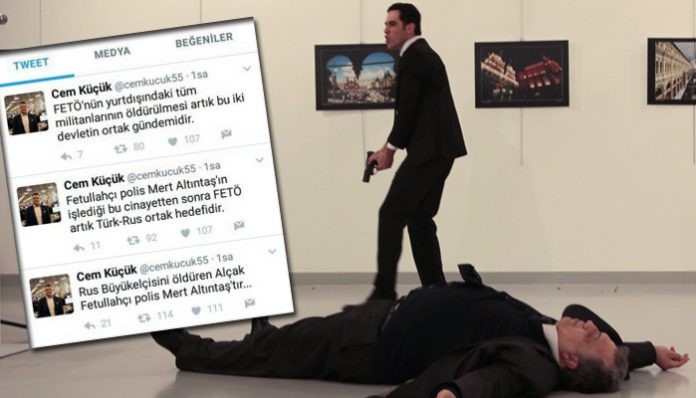 Immediately following the discovery that the gunman who shot the Russian ambassador to Turkey on Monday evening was a police officer, the pro-government media was quick to put the blame on the Gülen movement.

Cem Küçük, a notorious harasser who constantly targets critics of President Recep Tayyip Erdoğan, wrote on Twitter that the terrorist was a Gülen movement follower. Targeting sympathizers of the peaceful movement who live abroad, Küçük urged the state to kill them all. Speaking on behalf of Russia as well, Küçük argued that the Gülen movement is now a common target for both Russia and Turkey.Another staunch Erdoğan supporter, Sabah columnist Hilal Kaplan, tried to associate the gunman with the movement, arguing that he attended exam preparation schools run by Gülen sympathizers.Several other members of Erdoğan’s troll army also targeted the Gülen movement.

In addition, a senior official in the Turkish government told Reuters about strong signs of the attacker’s ties to Gülen without providing any evidence.

Your ticket for the: Pro-Erdoğan media immediately blames Gülen movement for murder of Russian ambassador