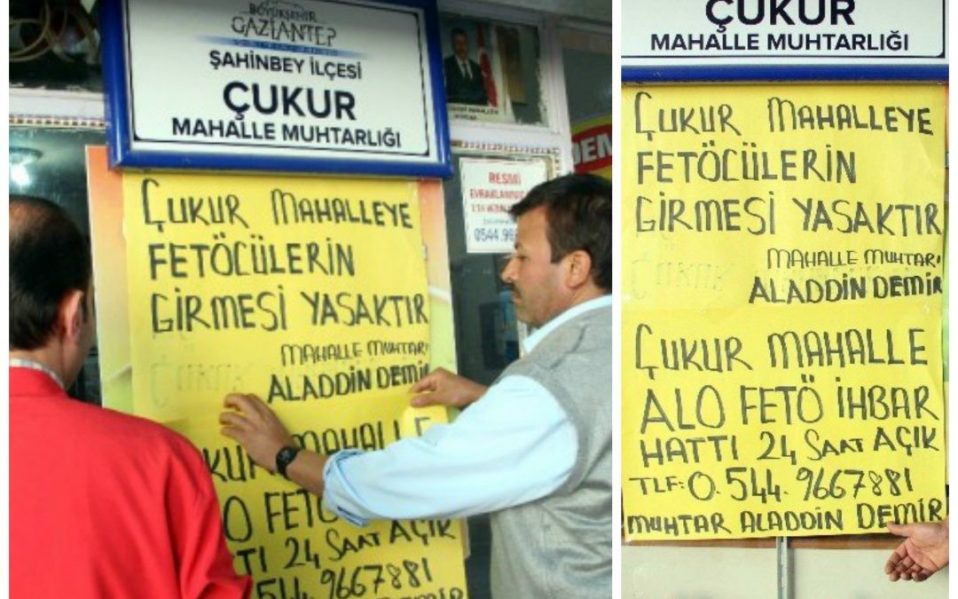 Aladdin Demir, the mukhtar (head) of the Çukur neighborhood in Gaziantep, hung two banners on the side of his office stating that sympathizers of the Gülen movement are not allowed in the area and that people can call him to report any transgressor via a 7/24 hotline.

The discriminatory practices backed by Turkey’s top state officials against the Gülen movement (aka Hizmet) has taken a turn for the worse with mukhtars refusing to let sympathizers of the movement even into the streets. The government accuses the movement of masterminding a July 15 coup attempt in Turkey, although the latter denies any involvement.

“It is forbidden for pro-FETÖ to enter the Çukur neighborhood,” Demir said in the first banner, also giving his mobile phone number, or what he calls the “FETÖ report line,” in the second one.

The second banner says the hotline is open 24/7.

“I don’t want these traitors in my neighborhood or my country. If I see any of them around here, I will immediately report them to the police and the relevant authorities,” Demir told the İhlas news agency.

“People should not expect everything from the government,” the mukhtar said in clear reference to earlier calls from state officials.

Huge banners previously hung on the walls of two restaurants in Istanbul read: “Parallels and sympathizers of parallels not allowed inside the restaurant.”

“Traitors, putschists and parallels not are allowed in,” another banner hung on the side of a restaurant in Denizli’s Acıpayam district stated on Sept. 4. “Parallel” refers to members of the alleged terrorist network of the movement within state institutions.

A Konya stallholder also hung a banner that read “Gulen sympathizers are not allowed to shop here,” in August of this year.

Discriminative discourse used by government officials against the movement has also echoed among the Turkish diaspora abroad. Hizmet members have been prevented from observing Friday prayers in DITIB mosques in the cities of Bergneustadt and Waldbröd in the German state of North Rhine-Westphalia (NRW), Ralf Jäger, NRW’s interior minister, told Deutsche Welle in mid-September.

Earlier in August, a Turkish man, believed to be a follower of the Gülen movement, was attacked a day after Turkey’s consul general in Rotterdam called on people to “do their part” against the movement.

Insults and the targeting of Hizmet volunteers are not limited to the period after July 15, with President Recep Tayyip Erdoğan himself previously calling Gülen followers viruses, leeches, terrorists, bloodsuckers, assassins and gang members, among many other insults.

Your ticket for the: Mukhtar bans Gülen followers from neighborhood, sets up 24/7 informant hotline