Mother of ambassador’s murderer: My son did not attend any Gülen school[ACCUSE AND BLAME GULEN MOVEMENT FOR EVERTHING] 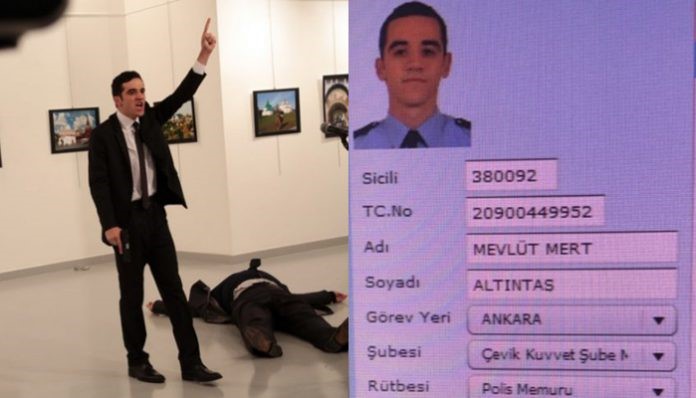 “My son did not attend any prep school before his police exam. My son was calm and introverted,” said mother Altıntaş during a police interrogation.Altıntaş also said her son called her on the day of assassination but since she was a guest in another house, told him to call back later.

President Recep Tayyip Erdoğan and the Justice and Development Party (AKP) government claimed in the first hours after the assassination that the murderer was a member of the Gülen movement.

Accordingly pro-Erdoğan media published stories that police officer Mevlüt Altıntaş attended Körfez preparation school, which has been closed down by the government.Another pro-government media claim that the murderer of the Russian ambassador had used a smart phone application known as Bylock in an effort to link the gunman to the Gülen movement was also denied on Thursday.

According to a Doğan news agency report, Altıntaş did not download ByLock although pro-government columnist Abdulkadir Selvi wrote on same day in Hürriyet that the police had downloaded the application.

A pro-government daily similarly claimed that Altıntaş was connected to 10 blacklisted Bylock users, according to government reports. Selvi further asserted that the police officer was a suspect in a plagiarism investigation from 2010 in which the Gülen movement was accused of stealing questions for the KPSS exam, a prerequisite for placement in the bureaucracy. However, the murderer, born in 1994, would not have been eligible to take that exam in 2010.

All the suspects in this particular probe were either dismissed or jailed. Yet, journalist Ahmet Şık, a strong critic of the Gülen movement, tweeted that the police officer has never been the subject of any Gülen-linked investigation.

Meanwhile, in an open challenge to Moscow’s statement that it is too early to say who masterminded the murder of Russia’s ambassador to Turkey, Andrei Karlov, President Erdoğan said on Wednesday that the assassin was obviously a member of “FETÖ,” a derogatory term coined by the AKP government to refer to members of the Gülen movement.

Jaish al-Fatah, an umbrella organization that encompasses the al-Qaeda-linked al-Nusra Front, has reportedly claimed responsibility for the murder of Russian Ambassador Karlov. The terrorist group claimed responsibility via a letter which appeared on the Internet. The letter was written in Arabic and has yet to be confirmed.

In the meantime, Turkish-Islamic scholar Fethullah Gülen on Monday condemned the assassination of Russia’s ambassador to Turkey as a “heinous act of terror” and urged the Turkish government to identify anyone who aided the gunman.

Your ticket for the: Mother of ambassador’s murderer: My son did not attend any Gülen school[ACCUSE AND BLAME GULEN MOVEMENT FOR EVERTHING]

Mother of ambassador’s murderer: My son did not attend any Gülen school[ACCUSE AND BLAME GULEN MOVEMENT FOR EVERTHING]