Take Action: Urging the European Court Of Human Rights to Take Immediate Action As Regards the Recent Applications from Turkey 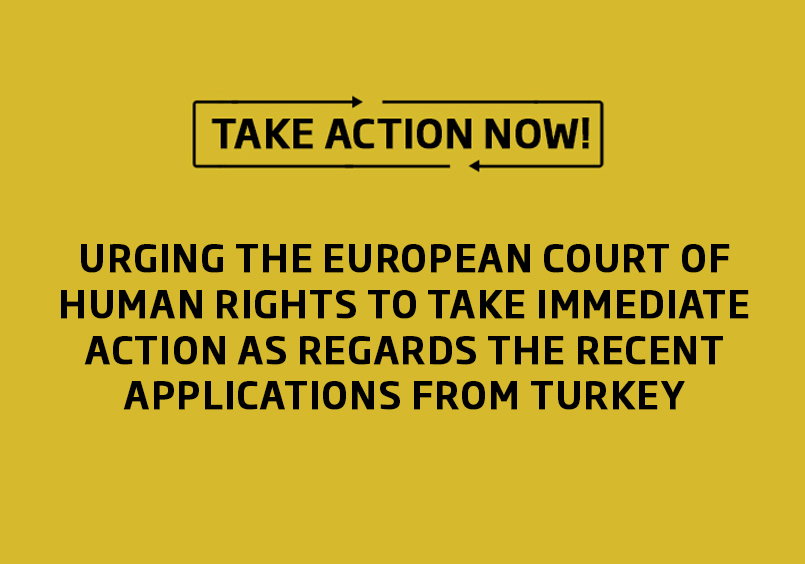 This statement is a short summary of the Position Paper prepared by the AST on the approach of the European Court of Human Rights towards recent applications coming from Turkey. For detailed information please see the Position Paper titled “European Court of Human Rights Should Reconsider Judicial Independence in Turkey Before Referring Cases to Domestic Authorities.”

The European Court of Human Rights (hereinafter “ECtHR”) has rejected nearly 25,000 applications from Turkish applicants as regards the convention rights violated after the attempted coup in July 15, 2016 on the ground that the applicants have not exhausted domestic remedies. Exhaustion of domestic remedies is an admissibility criteria prescribed in Article 35(1) of the European Convention on Human Rights (hereinafter “ECHR”). If an admissibility criterion has not met, the Court rejects the case without examining on merits, therefore, all the criteria in Article 35 ECHR are essential. However, it must be noted that the ECtHR has developed some exception clauses by its case-law. According to the case-law of the Court, non-exhaustion of domestic remedies can be ignored if the domestic remedies are not available or not going to be effective when applied. Hence, merely having the domestic rules providing remedies to the victims is not seen as satisfactory by the ECtHR. We believe the present situation in Turkey falls into this category. The applicants must not be referred to the existing local remedies as they will not provide any comfort to the victims, but moreover will only increase their suffering.

The Court referred applicants to the State of Emergency Inquiry Commission that was founded recently to examine cases regarding the applications of the decree laws adopted during the state of emergency. However, as explained in detail by the Position Paper, there are strong doubts on the work of the Commission. It has taken no decision as of mid-November out of more than 100,000 applications and no president has been appointed to the Commission yet. Just as the judiciary in general, independence and impartiality of the Commission is under suspicion as well. Independence of judiciary is a crucial component of the rule of law and very important for the effectiveness of the domestic remedies. The Position Paper elaborates in detail why the judiciary in Turkey has been weakened by the government’s actions and cannot be seen as acting independently. Recent amendments to the system of appointment of judges and prosecutors enable the government to employ people based on their political ideas. Basically all the judges and prosecutors feel threatened by the government’s actions targeting dissidents. Not to risk their jobs and freedom, it is not quite possible for judges and prosecutors to give a judgment against the ruling party’s interests where nearly one-third of judges and prosecutors were dismissed because of their ideologies.

Considering all the information in the Position Paper, the AST urges the European Court not to refer cases to the domestic authorities as this will create more severe situation in the country.

The petitions will be delivered to following addresses:

Express your views or send attached statement to following addresses:

The European Court of Human Rights

Judges of the Court

Following are the members that were in the committee that decided on the ruling: Your ticket for the: Take Action: Urging the European Court Of Human Rights to Take Immediate Action As Regards the Recent Applications from Turkey

Take Action: Urging the European Court Of Human Rights to Take Immediate Action As Regards the Recent Applications from Turkey