EXAMPLES OF OPPRESSION ON JUDGES AND PROSECUTORS DETAINED AFTER COUP ATTEMPT 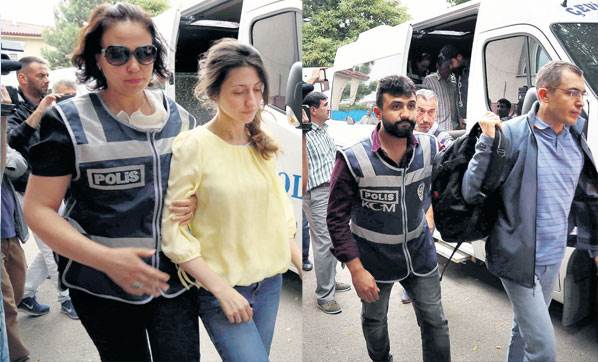 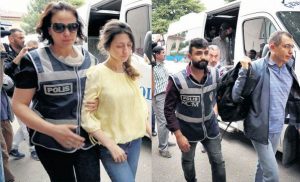 Even though judges and prosecutors at Penal Courts of Peace have been specially selected from pro-government YBP, a dedicated communication have been established and these courts have been monitored by HSYK, attorney generals and commission chairs in order to prevent any error. There was no evidence for arrests but a list of arrests and questions to be used for interrogation. The process has been followed by commission chairs and attorney generals and HSYK was always in oversight. When there was problem in arrests, oppression was applied by directing the crowds to the courthouse, as it was the case in Duzce province.Particularly, the judges and prosecutors assigned for arrests after the coup attempt are in fear of being included in the subsequent lists and being discharged from profession if they don’t accomplish these arrest processes. A few of the hundreds of examples observed countrywide after the coup attempt is given below.

In Denizli province, Penal Court of Peace judge H.A. has not decided for arrests since the list sent by HSYK did not provide evidence. H.A. was laid off by HSYK the same day and the judge S.U. who replaced him/her decided on arrests of all the 23 judges.

In Duzce province, during investigation by the court on duty of the objection of arrests of two female judges who recently gave birth and were nursing their young babies, Deputy Attorney General Ahmet Altun has put pressure on the judge on duty by saying “Mr. Judge, there should not be any deficiency!” After the decision on release of breastfeeding suspects, the attorney general, his/her deputy and commission chair have verbally complained about the judge to HSYK and Ministry of Justice and that judge has been removed from the list of judges on duty. After this complaint, the judge deciding on release have been laid off via second list and he were then subject to detention decision. At the night release decision while Head of Criminal Court, Head of Bar A.D. and Deputy Attorney General were criticizing that decision, one person present stated that “but those lady judges are nursing their babies”. The Deputy Attorney General Ahmet Altun said “F*ck that baby, let it die!”. This incident has been told by the Head of Bar in Duzce to the lawyers.

When detention decision was issued for prosecutor Y.H. and his spouse judge E.H. of Kars province, they have ended their vacation in Izmir and came back to Kars accompanied by their 3.5 years-old child and 9 months-old baby. They have both been arrested, the objection of the mother judge to breastfeed the baby has been rejected by Kars Attorney in General. The same attorney in general has shouted the detained judge and prosecutor “Traitors!”.

There was a detention decision against judge K.K. and his/her spouse T.K. in Diyarbakir. The prosecutor who knew that judge K.K. had a child with Down syndrome had not sent the judge to detention and declared in tears that he/she is in great risk because of this decision and he/she has heard of a new list of 1500 judges and prosecutors. These examples are important in the sense that they show the level of pressure the judges and prosecutors feel, what they can be subject to because of the decisions they are going to provide.

On 13 August 2016, HSYK Deputy Chair Mehmet Yilmaz tweeted “After the treacherous coup attempt, judiciary personnel who have been identified as members of armed terrorist organization have been discharged immediately (Ref: @mehmetyilmaz, 13.08.2016, 14:03)” and violated the principle of presumption of innocence. According to this approach, there is no longer need for courts and trials.

Per law dated 23 July 2016 all the memberships in Supreme Court of Appeal and State Council have ended before their regular term of duties and these courts have lost their independence. After that date, only members of pro-government YBP have been chosen with the condition of being loyal to the government. [Just the day after the coup attempt and early in the morning, arrest warrants have been issued for nearly 200 members of Supreme Court of Appeal and State Council.

Even though the following day was holiday, HSYK has convened without inviting 5 of its members and then discharged them.

Members of the State Council have been detained in the offices where they were invited and then been arrested unlawfully in violation of the detailed procedures set out for higher court members in the legislation for higher courts.

Your ticket for the: EXAMPLES OF OPPRESSION ON JUDGES AND PROSECUTORS DETAINED AFTER COUP ATTEMPT

EXAMPLES OF OPPRESSION ON JUDGES AND PROSECUTORS DETAINED AFTER COUP ATTEMPT