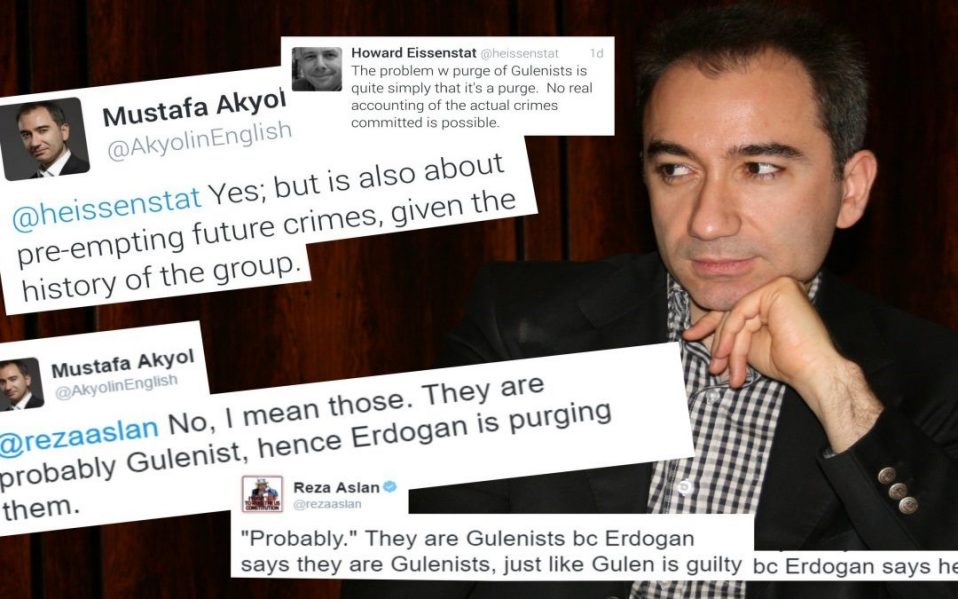 Presumption of Innocence. It is not the case for Gulenist civil servants, the arrest of more than 25,000 civilians and the detention of 40,360 others across Turkey are a precautionary measure to prevent “future crimes” that might be committed by the Gülen movement, according to Turkish columnist Mustafa Akyol.

Akyol had tweeted on his official account that the ongoing purge in Turkey was “about preempting future crimes, given the history of the [Gülen] movement,” which is accused by the Justice and Development Party government and President Recep Tayyip Erdoğan of masterminding the attempted overthrow of the Turkish government. Akyol’s tweet came in response to an earlier tweet posted by Howard Eissenstat, an associate professor at St. Lawrence University. “The problem w purge of Gulenists is quite simple that it’s a purge. No real accounting of the actual crimes committed is possible,” Eissenstat said in his tweet on Aug. 28.This is not the first time Akyol has defended the ongoing purge of Gülenists. The Turkish journalist, who describes himself as a “classical liberal,” drew criticism from social media users when he said in a tweet on July 18 that Fethullah Gülen must be extradited without any need for legal process. In response to a question directed at him by Eissenstat as to whether he was suggesting legal extradition or “just kicking Gülen out,” Akyol said, “Whatever works.”

In another tweet, Akyol claimed that a total of 2,700 judges and prosecutors recently dismissed from their positions were purged because “they were probably Gülenists, and that’s why Erdoğan was purging them.”

Your ticket for the: Columnist says purge of Gulenists a move to prevent “future crimes”