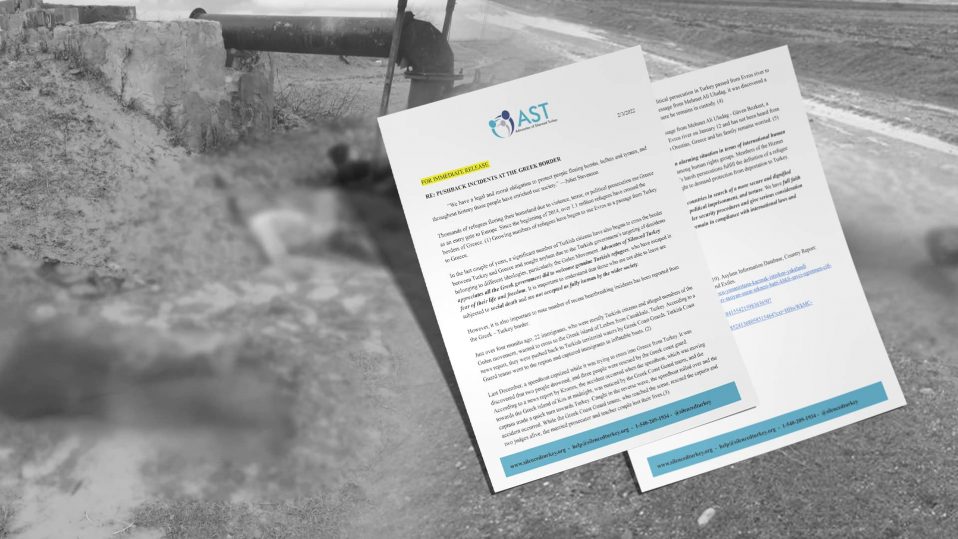 RE: PUSHBACK INCIDENTS AT THE GREEK BORDER

“We have a legal and moral obligation to protect people fleeing bombs, bullets and tyrants, and throughout history those people have enriched our society.” —Juliet Stevenson

Thousands of refugees fleeing their homeland due to violence, terror, or political prosecution use Greece as an entry gate to Europe. Since the beginning of 2014, over 1.1 million refugees have crossed the borders of Greece. (1) Growing numbers of refugees have begun to use Evros as a passage from Turkey to Greece.

In the last couple of years, a significant number of Turkish citizens have also begun to cross the border between Turkey and Greece and sought asylum due to the Turkish government’s targeting of dissidents belonging to different ideologies, particularly the Gulen Movement. Advocates of Silenced Turkey appreciates all the Greek government did to welcome genuine Turkish refugees, who have escaped in fear of their life and freedom. It is important to understand that those who are not able to leave are subjected to social death and are not accepted as fully human by the wider society.

However, it is also important to note number of recent heartbreaking incidents has been reported from the Greek – Turkey border.

Just over four months ago, 22 immigrants, who were mostly Turkish citizens and alleged members of the Gulen movement, wanted to cross to the Greek island of Lesbos from Canakkale, Turkey. According to a news report, they were pushed back to Turkish territorial waters by Greek Coast Guards. Turkish Coast Guard teams went to the region and captured immigrants in inflatable boats. (2)

Last December, a speedboat capsized while it was trying to cross into Greece from Turkey. It was discovered that two people drowned, and three people were rescued by the Greek coast guard. According to a news report by Kronos, the accident occurred when the speedboat, which was moving towards the Greek island of Kos at midnight, was noticed by the Greek Coast Guard teams, and the captain made a quick turn towards Turkey. Caught in the reverse wave, the speedboat rolled over and the accident occurred. While the Greek Coast Guard teams, who reached the scene, rescued the captain and two judges alive, the married prosecutor and teacher couple lost their lives.(3)

Ahmet Güngör, a Turkish citizen fleeing from political persecution in Turkey passed from Evros river to Greece two weeks ago. According to a Twitter message from Mehmet Ali Uludag, it was discovered a week later that he was pushed back to Turkey, where he remains in custody. (4)

More recently – according to another Twitter message from Mehmet Ali Uludag – Güven Bozkurt, a teacher dismissed by decree law, passed through Evros river on January 12 and has not been heard from since that day. The last point of contact was from Orestias, Greece and his family remains worried. (5)

It is important to note push-back news creates an alarming situation in terms of international human rights law and refugee law and raises concerns among human rights groups. Members of the Hizmet Movement fleeing from the Turkish government’s harsh persecutions fulfill the definition of a refugee under the 1951 Refugee Convention and have right to demand protection from deportation to Turkey.

We underline once again that people leave their countries in search of a more secure and dignified future by escaping life-threatening conditions, political imprisonment, and torture. We have full faith that the Greek authorities will review their border security procedures and give serious consideration to maintaining the safety of asylum seekers to remain in compliance with international laws and regulations.

Tenedou 21B (near Amerikis Square), Athens

Group of Lawyers for the Rights of Migrants and Refugees

PRESS RELEASE ON #PUSHBACKS at GREEK BORDER:
AST appreciates all the Greek government did to welcome genuine Turkish #refugees, who have escaped in fear of their life and freedom.@CommissionerHR @vonderleyen @eucopresident @DavidSassoli @Mariearenaps @davidmcallister pic.twitter.com/J7CYsUuTdF

Your ticket for the: Call on the Government of Greece to investigate and end the push-backs of Turkish refugees