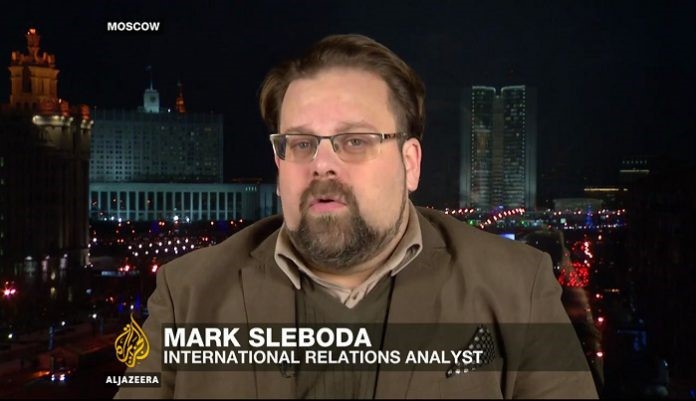 Turkish President Recep Tayyip Erdoğan’s claim that US-based Turkish Islamic scholar Fethullah Gülen was behind the assassination of Russia’s ambassador to Turkey on Monday is an insult to Russian intelligence, a prominent Russian analyst said.

Speaking during an interview with Aljazeera International on Tuesday, Mark Sleboda – a Russian international relations and security analyst – said the idea that Gülen followers are behind Russian envoy Andrei Karlov’s killing by a Turkish police officer on Monday is an insult to Russian intelligence.

“The idea that this is done by Gülenists, the bogyman, monster under the bed that Erdoğan has used to justify his purges, is frankly an insult to our intelligence,” he said.

Underlining that Turkey made a similar attempt by putting the blame on the Gülen movement when Turkish jets downed a Russian aircraft in November 2015, Sleboda said the Russian community responded by laughing at Erdoğan’s claims that the two pilots who were later arrested for downing the Russian jet were actually Gülen followers.

A Russian fighter jet was shot down by Turkish military aircraft near Turkey’s border with Syria on November 24, 2015. Following the incident, two contradicting official statements came from the two countries. According to Putin, the Su-24 was struck by air-to-air missiles fired by Turkish F-16s as it was flying over Syrian territory. However, the Turkish government claimed that the Russian plane violated Turkish airspace and it was engaged after being warned.

The pilot of the downed Russian plane was shot dead as he descended with a parachute after surviving the attack. The pilot was later identified as Lt. Col. Oleg Peshkov by Russian authorities.

Russia imposed a number of sanctions on Turkey in response to the incident. After seven months of tension, Erdoğan apologized in a letter to Putin in June.

Following the incident, Alparslan Çelik, a Turkish ultranationalist, had claimed that his group killed the Russian pilot. Çelik was reportedly fighting in the ranks of Turkmen groups in Syria.

On Monday, police officer Mevlüt Mert Altıntaş, who was serving in the special forces unit in Ankara, reportedly shouted “Only death can take me from here” as he protested Russian involvement in Aleppo with slogans in both Turkish and Arabic after gunning down the Russian ambassador as he was giving a speech at an Ankara art gallery. He vowed revenge against “all who have a part in the oppression,” in reference to Syria.

In a letter which appeared on the Internet on Wednesday, Jaish al-Fatah, an umbrella organization that encompasses the al-Qaeda-linked al-Nusra Front, said “one of the heroes of the Jaish al-Fatah, Mert Altıntaş carried out the execution of Russian Ambassador Andrei Karlov in Ankara,” because the world remains silent to what is taking place in Aleppo, no support comes to the Muslims in the Levant [an old term referring to countries of the eastern Mediterranean] and for the victory of the Syrian people.

During a press conference with Albanian President Bujar Nishani in Ankara on Wednesday, Erdoğan challenged Moscow’s statement that it is too early to say who masterminded the murder of Karlov and said: “The assassin of the Russian ambassador is obviously a member of FETÖ. There is no need to hide it.”

Your ticket for the: ACCUSE AND BLAME GULEN MOVEMENT FOR EVERTHING Russian analyst: Turkey’s claim Gülen was behind envoy’s killing insult to ‘our intelligence’[PROPAGANDA-SCAPE GOATING]